Sonakshi Sinha Interview on The Front Row with Anupama Chopra 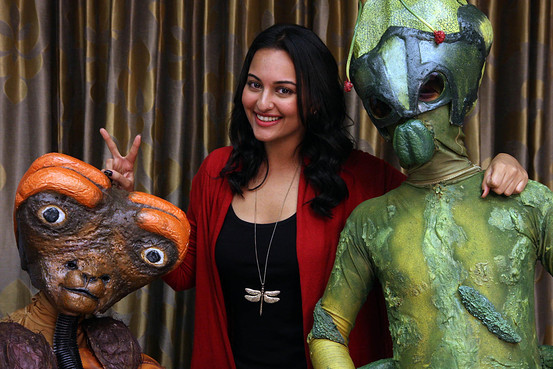 Sonakshi Sinha made her Bollywood debut next to Salman Khan in “Dabangg,” a movie that went on to become the box-office hit of 2010. Since then, her career has taken off.

Ms. Sinha speaks to film critic Anupama Chopra about her no-kissing rule, her ideal man, and her upcoming film, “Joker.”

Here is an edited transcript from their conversation on “The Front Row with Anupama Chopra”:

Anupama: Sonakshi, your co-star in Joker, Akshay Kumar, has described you as a pure “Bhartiya nari,” (an Indian woman in the classical sense.) Is that an apt description?

Sonakshi Sinha: To him, yes because he thinks that I look like the Hindi film heroines from the previous era.  So that’s what he thinks Indian heroines should look like onscreen. I don’t know, I guess that’s his description of me.

Anupama: In Joker, you’re playing an NRI character, or a non-resident Indian. But she comes to India and has to be disguised as a village woman.  Why is this village woman such a recurring note in your career? Are you getting typecast?

Sonakshi: When the script comes to me, I look at it and ask: Will I like to play this character? Will I fit into the mould?  Will the audience like to see me playing that role? I don’t think, “Will I be wearing Indian clothes?” Coincidentally, yes, all my films have been in the Indian space but the characters have been so different from each other that I’ve enjoyed playing the difference from one to the other.

Anupama: But when you have only done two films, how do you know how the audience wants to see you?

Sonakshi: I guess that was set when my first film released. With Dabangg and the kind of success it had and the kind of acceptance that I got with not only the audience but the industry as well.  Because I don’t remember a newcomer signing six films immediately after their first film released so in that way, I’ve been blessed to be able to gauge what people want to see me as.

Anupama: Sonakshi, most of your co-stars, apart from Ranveer Singh, are about 20 years older than you.  Do you ever feel like there’s a generation gap on the set? Do you feel intimidated?

Sonakshi: Never, because luckily I started off with Salman Khan, who has known me since I was about 16-17 years old and he pushed me into acting.  I was studying fashion and he used to keep telling me, “Why are you wasting your life? Lose weight, get into films.” Then came Akshay Kumar. He doesn’t give off that superstar vibe.  He’s a local boy, basically.  So he makes you feel so comfortable, friendly and jovial on the sets, making everybody laugh.

Anupama: And Ajay Devgn?  He’s kind of serious, isn’t he?

Sonakshi: Ajay is serious, yes, but he does have his fair share of light moments.  He plays pranks on the sets.  He fed me red chili paste and disguised it as gajar ka halwa (a sweet, carrot-based dish) on the set.  So he’s got his light moments but there’s so much to learn from him because he is so involved in most of the filmmaking process. To see an actor so involved is amazing.

Anupama: You’re an urban, educated woman.  When you do a film like “Rowdy Rathore,” where the hero is calling you “maal,” do you get offended or do you see it as part of the deal.

Sonakshi: I see it as part of the deal. I see it as part of a film that I like to watch. It’s funny for me as an urban girl, so I don’t take offense to it. I do it as part of my job and, overall, it works for the film. That’s what the masses catch onto. So I don’t see anything wrong in it. If it’s something really extreme, obviously you do take a step and put your foot down and say, “No, I’m not doing this.” But if it’s harmless, it’s fine.

Anupama: So for you this was just harmless.

Sonakshi: Yes, it was. Absolutely.

Anupama: You’ve said before that you have very strict rules about not kissing or wearing skimpy clothes.  Is that a handicap in an environment where Sunny Leone is a mainstream heroine?

Sonakshi: Not at all. Today, like I said, no newcomer had six films after their first film.  I’ve got no lack of work. With films that come to me, usually if there is a concern, I lay it across the table right then and there. I tell the director and the producer that, “Okay, I’m not comfortable with this.” They then have a choice to go to somebody else but it’s never happened. Never happened. It’s not a handicap, it’s a strength.

Anupama: Why do these rules matter so much?

Sonakshi: Because the industry has survived for so long without it.

Anupama: Sonakshi, whose career would you like to emulate? Who is a role model for you?

Sonakshi: In terms of movie choices and in terms of the way their career panned out eventually, I think Rani Mukherji, Kareena Kapoor are very good role models to have.

Sonakshi: Because they’ve survived for so long.  It’s not easy in this industry. The kind of variations they’ve done in their roles, in the kind of films that they’ve done is commendable.  Also, in terms talent and acting, Vidya Balan – she’s amazing onscreen.

Anupama: Karan Johar once said that the outsiders into the film industry, like Shah Rukh, will always be hungrier and will always be better behaved than second-generation kids because they take the industry more for granted.  Do you think that’s true?

Sonakshi: I’m very well-behaved. I guess I don’t take it for granted because of the kind of life I led before I became an actor. I was about 30-35 kilos overweight.  In school, I was barely called by my name.  Kids were always picking on me. I was okay with that.  It sort of thickened my skin.  I think it was preparation for taking all the criticism now.  After that I started studying fashion designing.  I used to go to Churchgate to college.  I used to travel by trains.  We used to come home by rickshaws.  So it’s been a very normal upbringing.

Anupama: Do you think a lot about your competition? What is the struggle of a Bollywood heroine?

Sonakshi: Not really.  I’m pretty focused on what I’m doing. For me, right now it would be just a lot of criticism, a lot of negativity in the press. Something that is non-issue to me like my weight or something just being made up or a link-up or something like that.  It’s unfair that people think that they can say what they want about you.

Anupama: You responded to your link-up with Ranveer (Singh), and said, “He’s not my type.” So who is your type?

Sonakshi: I’ll give you the basic mould.  He has to be taller than me because I’m very tall. He has to have an amazing sense of humor that is on par with mine and my father’s – he sets a very high bar, his sense of humor is amazing.  He has to share the same interests that I have.

Anupama: Thank you so much Sonakshi and all best for Joker.