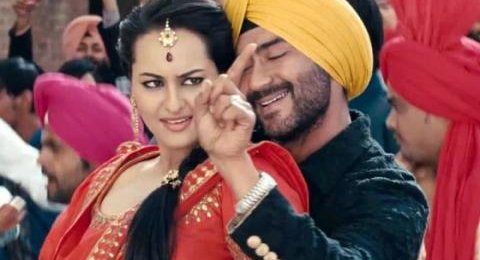 Don’t mess with a Sardaar!

That message is driven home loud and clear and many times over in director Ashwni Dhir’s Son of Sardaar, intended presumably as comeuppance for a community that has forever been stereotyped as cheerfully dimwitted in Hindi movies. Dhir, unfortunately, does little to shatter that cliche, but he does put Sardars front and centre in this harebrained action-comedy, portraying them as large-hearted and fearless, and capable of performing all sorts of gravity and logic-defying stunts.

Ajay Devgan is Jassi Randhawa, a Londoner who must visit his dead father’s hometown in Punjab to inherit ancestral property. There he crosses paths with Balwinder Sandhu (Sanjay Dutt), who has vowed to kill Jassi ever since his father murdered Balwinder’s brother 25 years ago. But Jassi, who unknowingly befriends Balwinder’s niece (a feisty Sonakshi Sinha) on the train journey home, is safe as long as he’s at the Sandhu home, because Balwinder and his bloodthirsty nephews won’t lift a finger on a guest.

Judged even by the yardstick of a ‘leave-your-brains-behind’ entertainer, Son of Sardaar falls considerably short, particularly because it wants to be too many things all at once. Dhir mines the premise for its comic potential, offering us some moments of inspired lunacy. But this is equally an action film, and the cartoonish set pieces fail to impress because they rely too heavily on tacky special effects. In one sequence, Dutt’s crony, pursuing Devgan on a motorbike, rams into onward traffic, and next thing you know, he’s riding the bike upside down mid-air. The same scene might have worked in a film directed by Rohit Shetty, who brings skill and a lightness of touch to comic-book action, but here such moments have little impact.

Still, nothing is more exasperating than the film’s clunky romantic track between Devgan and Sinha, which feels contrived and underdeveloped, and never helped by the string of unremarkable songs that only slacken the movie’s pace.

Son of Sardaar, as you may have guessed, belongs to that genre of modern Hindi cinema that requires you to suspend not just disbelief, but also common sense, and all manner of taste. Amidst a sea of lazy performances, the film’s one bright spot is Juhi Chawla, charming as Dutt’s desperate fiancee of 25 years, who woos him relentlessly with romantic overtures. Dutt, on the other hand, is stone-faced throughout the film, while the usually dependable Devgan appears unenthused with the slim material.

A remake of the Telugu hit Maryaada Ramanna directed by SS Rajamouli, who himself whacked the premise from a 1920s Buster Keaton hit, Son of Sardaar is only sporadically entertaining, and peddles the same tired stereotypes of Punjab and Sikhs. A cameo by Salman Khan, sadly, doesn’t make up for the film’s many flaws.

I’m going with a generous two out of five for director Ashwni Dhir’s Son of Sardaar. Even if you’re a fan of those loud 80s-style entertainers, this one demands a lot out of you.