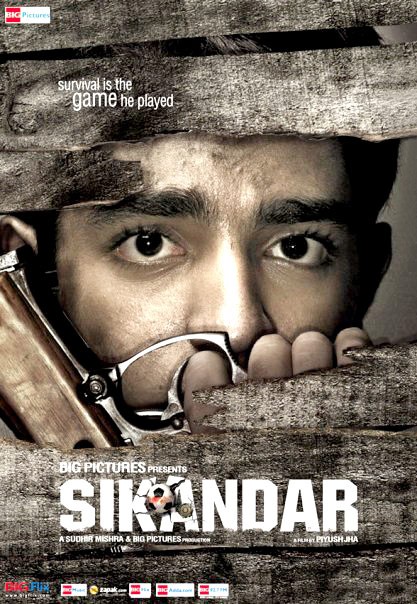 Sikandar (Parzan Dastur) is a football crazed schoolboy in Kashmir whose desires revolve around the happiness of his foster parents. One day, on his way home from school Sikandar finds a gun lying on the path. Despite admonishments by his newly made school friend, the 14 year old Nasreen (Ayesha Kapur), Sikandar picks up the gun. Sikandar gets embroiled in situations beyond his control, and people get killed. Are all these mere coincidences or is someone pulling the strings is what the rest of the movie is about.

The scene where the kid plays with the gun with the whole dichhak sounds is good. The story is similar to Tahaan but the screenplay is just horrible. The kid carries the gun in his school bag and brandishes it whenever he is in trouble. 14 year olds think of buying music system and washing machine. Kids get bashed for turning on washing machine and a soldier yells at the kids that their fate will be same as other dead kids. There is even a clichéd mehndi song in the climax.

Cinematography is very good with beautiful scenic locations. Background music is a bit annoying. Of all the songs only “Dhoop Ke Sikke” is good. Dialogues are horrible and every character says clichéd dialogues and delivers platitudes. Parzan Dastur is ok but Ayesha Kapur is horrible with her bad dialogue delivery and weird body language. She still seems to have the Black hangover in some scenes. Madhavan is horrible, Sanjay Suri and Arunoday Singh are ok but suffer from bad characterizations.

Piyush Jha’s direction is horrible and the movie is a confused product. It wants to be a children’s film, a movie about terrorism, a thriller and it has a surprising twist that is just ridiculous. This Sikandar is no winner.