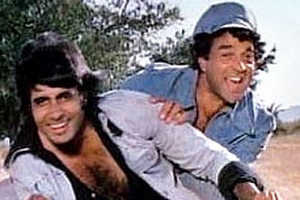 ‘With the Sippys involved in a family tussle, Subhash Ghai and Deepa Sahi might never get to complete their project

Sholay was going to be converted into 3D. However, Mukta Arts that had been working with Ketan Mehta’s Maya Digital on turning this project into a reality, has washed its hands off it. Mukta Arts, that holds a stake in Maya Digital is reportedly, put off by the legal hassles that the Sippy family is currently embroiled in.

This is the second project from the Sippys that has run into rough weather owing to the problems in their family. Earlier, producer GP Sippy’s son Suresh raised an objection against GP Sippy’s grandsons Sascha and Shaan, claiming that they had no right to license the remake rights of Seeta Aur Geeta to Sunil Bohra (Mumbai Mirror, February 7, 2011).’

‘Suresh has raised an objection this time around as well. While Sascha Sippy remained unavailable for comment, Suresh Sippy told Mumbai Mirror, “How can Ghai convert Sholay into 3D when we Sippys are in a legal conflict? My lawyer spoke to Ghai and told him about the same. And well, I don’t know anything about Maya Digital’s plans. Negative kahan hai unke paas? Yes, Sascha has the rights of Sholay but I also sent a message across to Sascha not to entertain any such proposals.”

However, Ramesh Sippy, the director of Sholay doesn’t seem to have any problem with the licensing. a source close to the family revealed, “Mr Ramesh Sippy is out from the family business after our film Brashtachar released in 1989.”

When contacted, Mukta Arts’s head honcho Subhash Ghai said, “I am not associated with Sholay getting converted into 3D. I am just a stakeholder in Maya Digital. As far as I am concerned, the matter ended some six months ago.”

When asked whether he was still pursuing the conversion of Sholay into 3D, Ketan Mehta said, “I don’t want to talk about this at all.” His wife Deepa Sahi too excused herself, saying, “We are working on ten projects and we at Maya Digital have a Non-Disclosure agreement on all of them.”‘