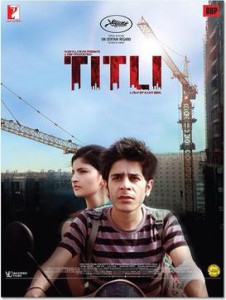 Titli is a film that had so much in its arresting plot which it couldn’t capitalize on. The story is very linear and without employing any standard twists given it is a dramatic-thriller. The film basically shows the dynamics in a family that’s going through financial crisis and their violent methods to overcome the crisis.

Titli is majorly gripping especially some fantastic scenes which are very edgy. But at the end it looked like a decent movie with lots of good scenes but together not making up for a thrilling watch. The film lacks in its narrative and amidst its gore and humor, the film fails to dive into each character’s individual journey.

The film is mostly shot in the real location which helps the film draw a connective and realistic line towards its story. Also not using a bgm does work for the film. How one wishes that the film was a little more elaborate about its characters.

However, the performances are extremely noteworthy especially of the female protagonist played by Shivani Raghuvanshi. Shashank Arora is also very good and successfully portrays a character who is desperate for business.

In the end, Titli is a very watchable film but also a film that misses an opportunity to be a terrific drama-thriller.