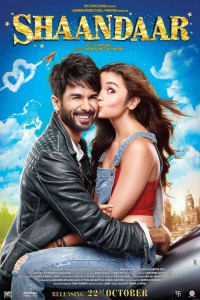 Comedies in Bollywood have mostly been made in the slapstick and over-the-top templates and we have some really memorable films in that space. But there are few films which have not been structured in regular templates and yet have emerged terrific comedies – “Khosla Ka Ghosla”, “Atithi Tum Ka Jaaoge”, “OMG Oh My god” and many more. Here comes the next comedy called “Shaandaar” a whacky comedy that is made in a world that’s tangibly dreamy and fantastical. So far, so interesting! Bahl and his writers were audacious enough to get into zones which are unimaginably bizarre and the screenplay is consistently bewildering. But despite of an interesting idea and an exciting space in comedy, “Shaandaar” is only funny in spurts.

The film’s first half invests in setting the mood right before it throws at you everything that’s out of the zone. The film has few really nice moments between the daughter-father duo and also the few bits of chemistry between the love leads strike a chord. But the film offer suffers from not-so-funny episodes and further comes across as an incoherent film.

The second half has couple of well thought of episodes that raise few laughs – especially the one that involves Karan Johar at his sarcastic best. But by the time the film is reaching its climax, one has already made up his mind it’s not getting any better.

The songs in the film are the real bright spots despite popping up out of nowhere. All songs leave a very strong impact and help the film to not lose the momentum further. The film looks glitteringly gold and beautiful visually and the exquisite destination wedding adds up to the affluence that the film carries along. How we wish that the film’s screenplay complemented its terrific assembly of cast.

Shahid Kapoor is earnest and refreshingly spontaneous. Alia Bhatt has few good buoyant moments with Pankaj Kapoor where she looks like in pure form, but blame it to the poor character sketch of her which restricts her performance. Pankaj Kapoor unfortunately is placed in a role where he isn’t required to do anything outside frowning, or playing protective father or having light banters with Shahid….in the entire film!
Shaandaar isn’t entirely unengaging thanks to few genuinely good moments and the well composed and choreographed songs. But that’s too less of a praise for a film that promised so much more. Disappointing!