Sanket’s Review: “Raaz 3 (3d)” is a compelling horror, but only in spurts. 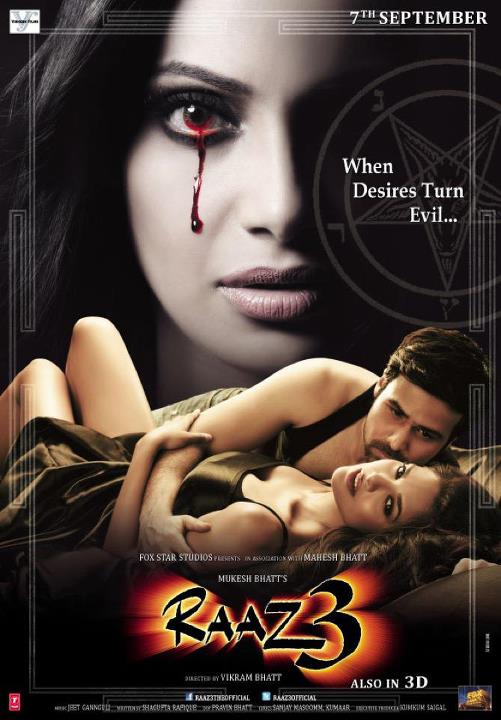 RAAZ 3, this week’s new outing, a horror, is film that definitely carries some thrilling sequences and also the sound effects work wheel within wheel. And what else, RAAZ 3 surrenders itself to only horror scenes without even giving half importance to the script which started on an interesting note! Thus resulting in some yawn inducing moments as well!

RAAZ 3 is undoubtedly the weakest installment in this series but its much better than some other sequels which Bhatt camp have served with likes of MURDER 2 and JISM 2. The film starts with detailing and we are served with three characters, the three poignant roles of this flick, who are well known for their work in film industry. It wouldn’t have been an issue even if the film wouldn’t have had a single horror sequences for first 45-50 minutes! Really! The issue is they compromise a challenging script just to give goose bumps to the viewers. Frankly, some horror sequences are noteworthy but some falls flat on face.

Also the culmination is tame and damn predictable. The proceedings only get worsened post-intermission, though there is one excellent horror scene here as well. That scene alone distracts you from several lapses that RAAZ 3 suffers from.

The music is poor. Apart from “Deewana kar” there’s not a single song which you can take away with you. The background score isn’t loud and used very seldom which enhances the value. Superb! Vikram Bhatt’s direction is decent which reflects in some of the scenes.

Emraan Hashmi invests earnestness in his role which get sidelined at some point of time. Bipasha Basu also registers a good performance. Esha Gupta doesn’t allows her acting instincts to flow out and her character turns out to be a caricature. This also is a blame on the part of writers who failed to make anything out of this poignant character.

RAAZ 3 is compelling horror, but only in spurts. Watch it on a day when you have nothing better to do. Strictly average fare!