Sanket’s Review: “Players”- Go For It! 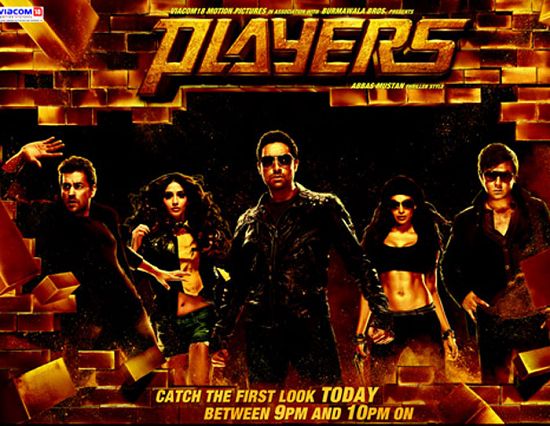 In an early scene of PLAYERS, Abhishek Bachchan and Bipasha Basu steals away a rocking necklace from Johnny Lever’s store. The scene is so ridiculously attempted that you get worried if the same treatment will be followed for next few hours. Fortunately, Abbas-Mastan gets on track and does justice to the film they borrowed the inspiration from, “The Italian Job.” Though the film has brought the rights of the hollywood hit, but director Abbas-Mastan makes aplenty changes and Indianises the film to the core adding comedy, love story, emotions, and songs.

PLAYERS coherently slides away on a tricky part where the film has too many confidentials kept smartly away from the audience. It does have unexpected twists because the directors never reveal their card all in sudden. They keep the film’s pace traveling by throwing twists in the narration, and never letting the pace to go down speedily. The hiccup lies in the way which director duo choses to make the film. he adds so much of everything that it goes over the top and also the length that goes above the bar. The whole Vinod Khanna-Sonam Kapoor track is ultra superficial and the bad background score makes it look more fake. Also the arguing dialogues between Omi Vaidya and Sikander Kher comes unnecessary. Director assigns Omi Vaidya for the comedy department, but after a point, its just too much!

The first half is where PLAYERS score its maximum points. The whole heist plan is so sharply executed that it never let your eyes flip for a second. Infact, the positives in first half distracts away from many loop holes of second half, when we leave the auditorium. Though there are two songs in first half and very regressive first scene, still as a whole, the first half gives very seldom chances to complaint.

The second half gets too long and there’s no single point where the film should end. As soon as the second half starts, the momentum is locked somewhere. But thanks to directors who bring it back towards last 30 minutes where again a whole new gamble is thrown away and there’s a way for culmination.

Its cinematography is a visual treat. It gives so much of stylish feel and it makes up for good treatment for eyes. Action sequences are stunningly shot and the blend of action and thriller is nicely brought in the script. The script is very deftly and keenly penned with screenplay which does goes down post-intermission. The songs are simply bad, though couple of them takes the narration ahead.

Abhishek Bachchan gets enough scope and does it well. Sonam Kapoor lacks in emotional scenes but does it well in second half. Bipasha Basu surprises with a very good act where as Neil Nitin Mukesh has good written material which he portrays decently. Omi Vaidya is terrific where as Sikander Kher needs acting lessons. Bobby Deol has very short role in the film, and has hardly any few dialogues to say.

To sum it up, PLAYERS is your popcorn film which has a good story, a very good first half, and enthralling final 30 minutes, and some good performances. It has its negatives which resticts the entertainment level. Also the length which should have been deleted by 30 minutes or more (The emotional factor, the Omi-Sikander arguments and also the romance angle were not adjusting well in the narration) for better and efficient flow. But after diluting all the negatives I will still say, Go For It!