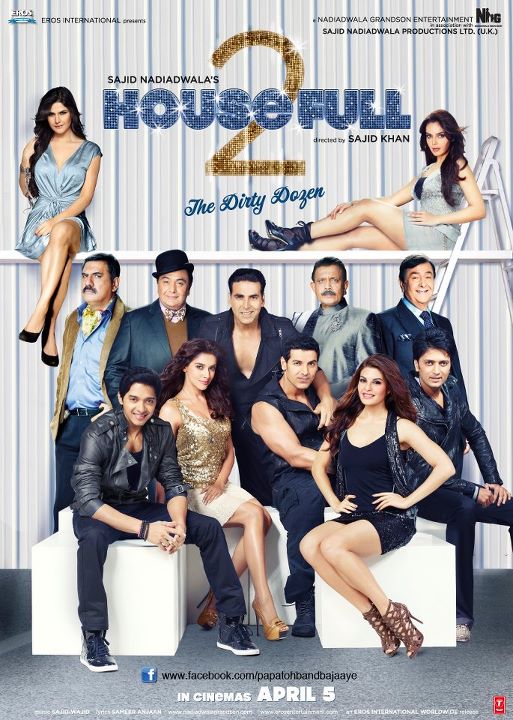 What do you expect in a sequel of a bizarre comedy? Simple- More bizarreness! And Khan delivers it without doubt. Its not an easy task to bring some 15 characters in one story and derive comedy with a story. Agreed, the story is simply corny, but as long as it derives comedy, the complaints are prohibited. Sajid Khan Successes in his endeavour of entertaining his audience because he knows pulse of the audience!

Without taking much time, the story quickly jumps into fights between sizzling-sibling sisters and also two brothers. It’s a pat on Sajid’s back because he brings every character for a reason and just doesn’t add them. Frivolous and pacy, HOUSEFULL 2 is a rollicking entertainment which has ample of sequences which will bring down the house and which will give pain in stomach. Frankly, humour is something Sajid never depicts in his gags rather he picks up slapstick jokes. What goes in positives is that the comedy isn’t quite forced, but its raised out of the situations. Although the film definitely reminds of Rohit Shetty’s GOLMAAL 3 and ALL THE BEST, but he never fails to add the flavour of his prequel as he adds the “I am joking” gags of Chunkey Pandey or he brings animals inside the home to scare away the protagonists.

The first half moves away in constructing the situations and then the later work is to make fun out of the situations post intermission. Few scenes stand out in first half like the one when a crocodile scratches Ritesh Deshmukh’s back seat and simultaneously a snake finds a place in John Abraham’s hand. It’s such an outrageous scene that you can do nothing but laugh at it.

Second Half marks away lots of confusion. Infact viewers have no clue who is marrying whom despite the director has served few episodes on them. But it has fun nonetheless and in between all the fun, story slides away out of the floor. But Sajid repeats mistake of adding drama which looks utter superficial. It brings a break in comic flow and hence becomes a hiccup. The climax is ordinary because he adds drama, but thankfully also has comedy.

All the four boys have their fun. Akshay Kumar as usual has superb comic timing and his “aieee” use is hilarious. Ritesh Deshmukh also enjoys himself. Shreyas Talpade has been served with few good one liners. But John Abraham surprises the most because he has attempted this genre for first time and he delivers a terrific performance.

Rishi Kapoor and Randhir kapoor enjoys their screen time and its pleasure watching this on screen. Boman Irani surprisingly gets very less footage. Mithun Chakraborthy is alright. The ladies add glamour in the screen. Chunkey Pandey and Johnny Lever both are equally amazing.

Sajid-Wajid’s music is fantastic. “Papa Toh band Bajaye” is super-energetic and amazing choreographed. The choreography of “Do U Know”, “Right Now” and “Anarkali” reminds you of “Oh girl you’re mine” “Volume Kam Kar” and “Aapla kya hoga.” The cinematography is good too.

HOUSEFULL 2 is an enjoyable film which brings fun back on screen. It has many comedy scenes; it has little action, little drama, and little romance, lots of glamour and fantastic songs. Needless to say, throw away your thinking cap the moment you enter auditorium. A better sequel than prequel- A must see film!