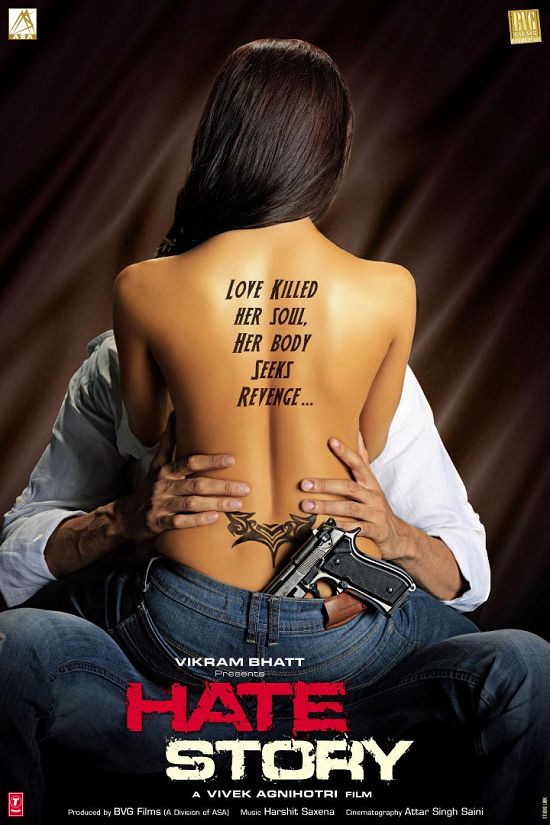 HATE STORY which is a sex thriller has a riveting and edge of the seat scenes and some really bold ones as well. The director has brought the blend of both sex and thriller in a fine way, but only one wishes if they had a good script in hands.  The film is entirely stressed totally on the female lady who is ready to give up anything just to take revenge from a rich and successful businessman who ruined his life because she took a picture of him while receiving money from a person.

The director doesn’t give a single second to spoon-feed the characters, when there are plenty of them. This is a bright point, but the script meanders as the film gets more and more intense. The direction is sharp, but his execution is saddled because of a weak script. HATE STORY should’ve been unpredictable and briskly paced, but its actually just a fine revenge story where, thanks to a sterling performance by its leading lady.

There are few wonderful scenes which are nail-biting. Like that chase scene between the goons and Nikhil Dwivedi towards the finale or the scene where Paoli seduces the cabinet minister in rain. The director has the nuances and he knows how exactly the scene should be. The film ends with a twist, which doesn’t really surprise but leaves you with sour taste. Frankly, the twist in the last scene was really not mandatory.

Although it runs for modest 2.10 hours, the editing should’ve been sharper especially in first half where the conversation between the two fighters takes place very slowly. The bold scenes are fantastically shot and are well used. The music doesn’t have any scope. Delhi is captured in a dark way.

Paoli dam does a very good job and helps the film to rescue from many of the lapses. Gulshan Devaiya lacks any acting gene, and unfortunately he has been prioritised too much than he should’ve been. His stammering is unintentionally funny and that makes a caricature out of him. Nikhil Dwivedi has countable scenes and the material written for him has very few sparks.

HATE STORY isn’t more than just a decent flick. A good story would’ve made the difference. It has its blemishes and positives, but the later part has more strength. Watchable once!