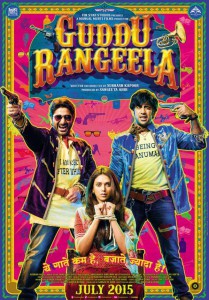 Guddu Rangeela passes off as one good engaging thriller-drama that opens its cards one by one. The film sets the momentum right from the beginning with a funny and zany song. The suspense element remains intact for entire first half and the screenplay is largely convincing. The first half is very tightly edited and has very few loose ends (the elaborate intro for Ronit Roy character).

Second hour also pretty much starts well and the narrative is taut despite nicely added comic reliefs, especially the “antakshari” part. But the film goes completely awry towards last half an hour. It all becomes too convenient and seemed like the writer ran out of ideas resulting in an awfully pedestrian climax. One starts getting restless especially because the film had built up such a nice and engaging plot and then leaves with a rather disappointing and predictable finale.

Arshad Warsi is decent in his performance but one does miss the Ishqiya-esque touch in his act. Also he hardly gets any comic lines, which I believe he has his strongest firm upon. Amit Sadh does extremely well and also justifies the meatier role. Ronit Roy seemed rehashing his performance from the 2013’s drab film BOSS and coincidentally it’s Aditi Rao Hydris character again who is the center of the problem.

Overall, it has a flawed writing in last half and hour in an otherwise enjoyable film. The film hooks the attention firmly for first 90 minutes and that gives the film the edge while measuring the final taste of the film. Its a good film but my greedy instinct that says it could have been so so so much more had it not been for an inept climax!