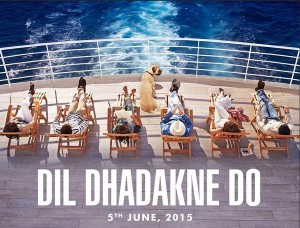 A film that deals about a dysfunctional family is not that knocks the doors of Bollywood every Friday. Very rarely its seen that a film is exploiting family dynamics. “Dil Dhadakne Do” has characters who are affluent, but still rooted which makes up for an interesting premise. And given that Zoya is at the helm of the affairs, who cracked the Bollywood code in that immensely enjoyable “Luck By chance” and who also depicted friendship and bonding in that beautiful “Zindagi na Milegi Dobara”, the expectations from “Dil Dhadakne Do” was rather high.

The film struggles initially while establishing each character at the pace of a tortoise. Until the film is dragged to the cruise, the film is pretty shaky with screenplay. And even the voiceover from a dog’s perspective just didn’t connect. But the film comes into its own when the cruise begins, although not everything is correct. But the episodes nicely invoke few laughs and keeps engaged in the characters. The scenes between Ranveer and Anushka are subtle and come across pretty good. All the scenes between them are breezy and lot of relevant issues are tackled in a very buoyant tone. But the film is pretty long and the slow pace only adds to the bruise.

The second half is considerably stable and the scenes involving Farhan are sharp. But the problem with the film is the emotions and the dynamics of the family are too loosely handled to anyway empathize. Also there are lot of subplots to keep a tab about. But the writers very conveniently pack the climax in a forcefully fast episode.

The film has good locales to please your eyes. The songs go well within the rhythm of the film. Also the dialogues at couple of places leave great impact.

But “Dil Dhadakne Do” rise above the ordinary because the performances are simply spot on but especially from the brief appearances of Farhan and Anushka who adds value through their characters. Anil Kapoor is solid here whereas Shefali Shah gets the role pretty much perfect. Priyanka Chopra’s emotional scenes are terrifically enacted. But it’s Ranveer Singh who makes the most of his character by a fantastic performance.

In the end, if it was not for a bumpy screenplay and over long length, this film would have sparked discussions. Yet, it’s entertaining for most of the parts and the drama doesn’t really bore although the slow pace might spread uneasiness. It might not bowl you over but it will keep you engaged for large part.