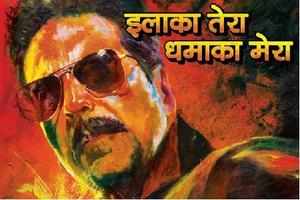 ‘Akshay Kumar’s Rowdy Rathore seems to have earned more money than Hrithik Roshan’s Agneepath. Though both films are yet to release.

Akshay Kumar’s Rowdy Rathore might just overtake the business of Hrithik Roshan’s Agneepath. And this despite the fact that both films haven’t released yet. How come you ask? Well Bollywood trade has gone to a different level altogether.

Apparently Karan Johar broke all earlier records by selling the satellite rights of his production Agneepath at a whopping 41 crores. The film stars big names from Hrithik Roshan, Priyanka Chopra to Sanjay Dutt so one was expecting good numbers. But what KJo managed is indeed a feat.

‘Buzz is that Akshay Kumar’s Rowdy Rathore produced by UTV and Sanjay Leela Bhansali and directed by Prabhu Dheva is being pitched much higher to television channels. And in all probability its satellite rights might be sold at Rs 45 crores.

Interestingly like Agneepath, even Rowdy Rathore is a remake. The Telugu original Vikramarkudu was a blockbuster hit. We just hope that the industry isn’t carried away by the success of original though. After all Players was nothing like the Italian Job – in both content and business.’