Rock On!! Movie Review by Sputnik 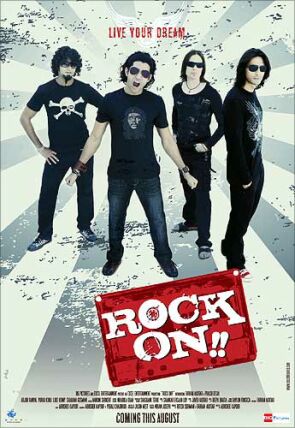 Rock On is about a rock band called Magik comprising the lead singer Aditya Shroff (Farhan Akhtar), lead guitarist Joy Mascerenhas (Arjun Rampal), drummer KD (Purab Kohli) and keyboard player Rob (Luke Kenny). The band had won a Channel V contest and were on their way to becoming popular when ego and misunderstanding between Joe and Aditya caused the band to break up.

A decade later Aditya is an investment banker, married to the pretty Sakshi (Prachi Desai), who is not happy with his life and has turned out to be a loner. KD works for his dad’s jewelry business. Rob composes jingles and stuff for music composers. Joy still cant find any job and is married to a bickering wife (Shahana Goswami) who runs his family’s fishing business.

Fate and Sakshi’s efforts bring them together. They decide to participate in a channel V contest to restart their musical journey. Will they be able to perform together on stage to recreate their old magic. This is what Rock On is about.

A movie about Rock Music has to have good rock music and the movie surely has one. Shankar-Ehsaan-Loy come up with a very good score and all the songs are good. Javed Akhtar’s unconventional lyrics go with the music. But the best part of the songs is Farhaan Akhtar’s vocals and the best scene of the movie is the band playing a rock version of Sanson Ki Zaroorat from Aashiqui.

As for performances Farhan excels in his role. He is equally believable as a rock singer and an investment banker. It’s definitely the best debut performance for this year till now. Arjun Rampal delivers another good performance after Om Shanti Om which should earn him some supporting actor nominations. Purab and Luke are good too. Prachi is very pretty and looks like a doll with her hairstyle and enacts her sweet role well. Shahana Goswami is very good as the bickering wife and this should earn her some supporting actress nominations.

Though the movie is directed by Abhishek Kapoor the movie bears the producer and lead actor Farhan’s stamp all over it. What is commendable is that for the first time there is a hindi movie based on rock music. The movie is not perfect and it has its flaws. The story is very similar to Dil Chahta Hai. This one has a rock band background but it is still a story of friends and how a single incident breaks their friendship and changes their lives. The incident that causes the rift here is much more believable than the one in Dil Chahta Hai though. The movie doesn’t have that many funny moments and is a little slow at places and people who are not into rock music may not like the rock songs much.

Even with its flaws Rock On is still a good movie to watch for its sincerity, performances, its message and last but not the least its music.