Robin Gibb, member of the Bee Gees, dies after battle with cancer 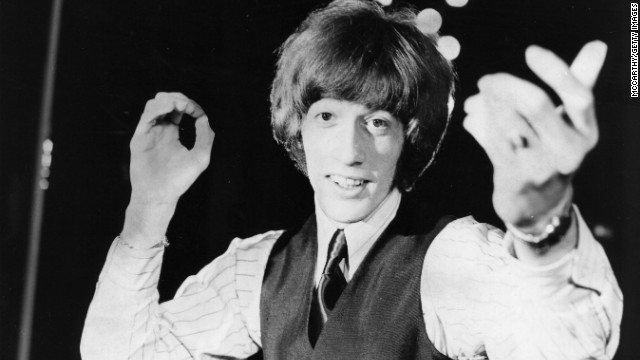 Robin Gibb, one of three brothers who made up the disco group the Bee Gees behind “Saturday Night Fever” and other now-iconic sounds from the 1970s, died on Sunday, according to a statement on his website.

Gibb “passed away today following his long battle with cancer and intestinal surgery,” said the statement, which was attributed to his family. He died in England at 10:47 a.m. (5:47 a.m. ET), according to a post on his official Twitter feed.

News of his death set off a torrent of reaction in social media. Musician Bryan Adams, for instance, lamented “another great singer dying too young” on Twitter, while fellow British band Duran Duran and current pop sensation Bruno Mars were among many who posted their condolences.

“The Bee Gees were/are the gold standard when it comes to pop/r&b melody, harmony and vocal arrangement. Massive loss,” wrote prolific pop songwriter Claude Kelly on his Twitter feed.
Reflecting on the career of Robin Gibb

Diagnosed with colon and liver cancer, Gibb had been in a coma as he battled pneumonia earlier this spring, representative Doug Wright said.

Doctors believe that Gibb had a secondary tumor, Wright said April 14, confirming a news account in the UK newspaper The Sun. Gibb had emergency surgery in 2010 for a blocked bowel and then had more surgery for a twisted bowel, Wright confirmed.

The only surviving member of the three Bee Gees is brother Barry, 65.

Robin’s twin brother, Maurice, died in 2003 from a twisted bowel. And younger brother Andy Gibb — who was not part of the group — died at 30 from a heart infection.

Robin Gibb’s death followed by just three days the loss of another major star of the 1970s disco era — Donna Summer, who died Thursday of lung cancer at age 63.

Robin Gibb was born in 1949 on Isle of Man off the British coast, and the Gibb boys grew up in Manchester. The family later moved to Redcliffe, Australia, where their group performed on television as the B.G.’s — a moniker they later altered to the Bee Gees. Their father, Hughie, was a drummer and big-band leader.

The family returned to England in the 1960s, and they began to emerge on an international scale. Through the end of that decade and into the next, they crafted melodies that utilized their unique voices to gain acclaim thanks to songs such as “I Started a Joke,” “To Love Somebody” and “How Can You Mend a Broken Heart.”

By the mid-1970s, they transitioned to develop more dance-oriented hits such as “Jive Talkin’ ” and “Nights on Broadway.”

Yet for all these earlier successes, the Bee Gees skyrocketed to new heights with the 1977 release of “Saturday Night Fever,” a movie starring John Travolta that was built around the group’s falsetto voices and disco-friendly songs.

In the latter part of the 1970s, the Bee Gees “dominated dance floors and airwaves. With their matching white suits, soaring high harmonies and polished, radio-friendly records, they remain one of the essential touchstones to that ultra-commercial era,” the Rock and Roll Hall of Fame says on its website.

“Saturday Night Fever” and the group’s 1979 album “Spirits Having Flown” yielded six No. 1 hits, “making the Bee Gees the only group in pop history to write, produce and record that many consecutive chart-topping singles,” according to the Hall of Fame.

While often more in the background, Robin Gibb was the lead singer on several of the Bee Gees’ top tunes including “I Started a Joke” and “I’ve Gotta Get a Message to You.” He also recorded several solo albums during his career.

Inducted into the Rock and Roll Hall of Fame in 1997, the Bee Gees sold more than 200 million albums, and their soundtrack album to “Saturday Night Fever” was the top-selling album until Michael Jackson’s “Thriller” claimed that distinction in the 1980s.

In a 2008 interview with Music Week, Robin Gibb shared one of his all-important rules for songwriting: “always keep a tape running,” in order to capture a moment of brilliance and inspiration.

“You never know in a three-hour writing session when you are going to come up with something and then if you’ll remember it completely,” he said. “All the ideas, everything, will be on tape and then you can always refer back at any time.

“Melodies will be born for the first time during writing and unless you have it on tape you haven’t got any way of remembering them. That is a cardinal rule.”

He also spoke of how he found it “good to have deadlines and pressure.”

“We certainly had a deadline with ‘Fever’ to write all those songs. I think, in one week, we wrote ‘How Deep Is Your Love,’ ‘Night Fever,’ ‘Stayin’ Alive,’ ‘If I Can’t Have You’ and the rest. Having a deadline sharpens you up, it gets you out of bed and it stops you going to bed, too,” Gibb said.

Gibb is survived by his wife, Dwina; his daughter, Melissa, and sons Spencer and Robin-John.