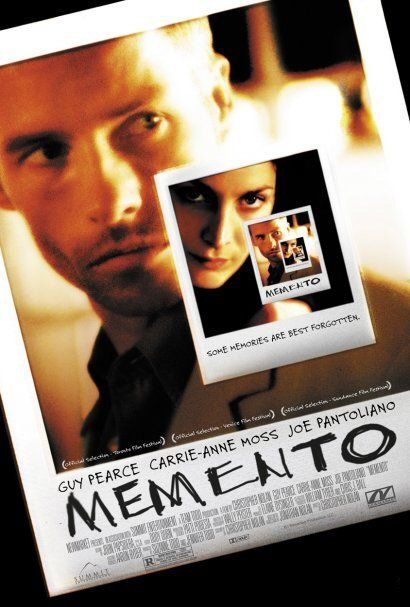 Memento is a psychological thriller that has Leonard Shelby (Guy Pearce), a former insurance fraud investigator searching for a man who he believes raped and killed his wife during a burglary attack. He gets hit on the head during the attack and as a result suffers from anterograde amnesia and cannot remember anything for more than 15-20 minutes. He takes polaroid pictures and writes down notes and tattoos important facts. He is aided in his investigation by Teddy (Joe Pantoliano) and Natalie (Carrie-Anne Moss). The movie is based on a short story written by Christopher Nolan’s brother Jonathan Nolan.

The movie has alternate black & white scenes which move forward and alternate color scenes which run in reverse chronological order. As each scene begins, Leonard has just lost his recent memories, leaving him unaware of where he is or what he was doing. The scene ends just after its events fade from his memory. By reversing the order, the viewer is unaware of the preceding events, just like Leonard. The final black & white scene turns into color halfway through the scene. It’s like converging from the front and back to the same point. The climax is just genius and you have to listen to the dialogues very attentively as therein lies the whole turning point of the movie. It’s when you see this you realize why the movie needed those scenes to be in reverse order. Watching Memento is like watching a puzzle unravel. Yes, it takes some cinematic liberties and leaves some things unanswered, yet it’s a cinematic masterpiece recommended for every one.

Guy Pearce is brilliant as Leonard Shelby. He conveys the confusion, despair, anger and sadness of a memory loss patient seeking vengeance excellently. Its a shame that he was not even nominated for an Oscar for such a brilliant performance. Joe Pantoliano and Carrie-Anne Moss are excellent too. The screenplay by Christopher Nolan is excellent and the editing is brilliant. The movie was nominated for Oscars for Best Original Screenplay and Best Editing.

It has marvelous dialogues like “How am I supposed to heal if I can’t feel time?”, “My wife deserves vengeance whether I remember it or not.”, “Memory can change the shape of a room; it can change the color of a car. And memories can be distorted. They’re just an interpretation, they’re not a record, and they’re irrelevant if you have the facts.” and “I have to believe in a world outside my own mind. I have to believe that my actions still have meaning, even if I can’t remember them. I have to believe that when my eyes are closed, the world’s still there. Do I believe the world’s still there? Is it still out there?… Yeah. We all need mirrors to remind ourselves who we are. I’m no different.”

The background music and the editing is excellent. Christopher Nolan’s direction is excellent and it is shameful that the Academy decided to ignore him and the movie in favor of some very undeserving movies like Moulin Rouge, In the Bedroom and Lord of the Rings II. Reverse chronological order has been used in movies and even in an episode of Seinfeld before but this is the best use of it as it puts the viewer in the same state of confusion as the protagonist. The director deliberately leaves some things unanswered which may leave some viewers confused.