This review was written by me a few years ago. 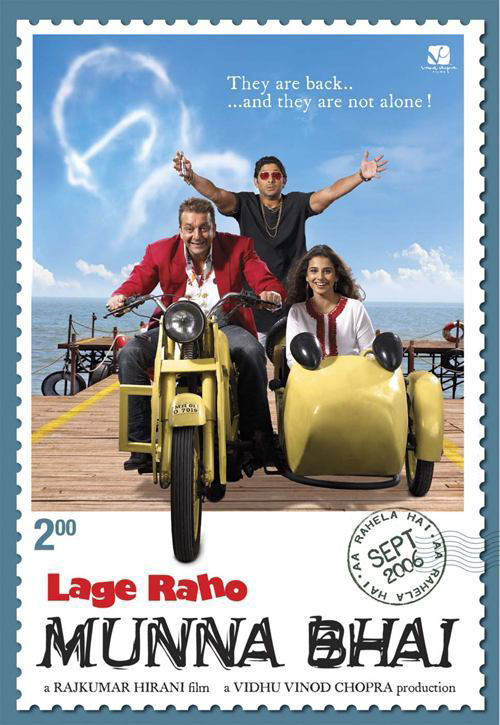 Lage Raho Munna Bhai is the second movie in the Munnabhai series. Though the lead characters are the same the story does not follow the first one and hence is not technically a sequel. Munna (Sanjay Dutt), a lovable goon pretends to be a Professor to win the heart of a beautiful radio anchor – Jhanvi (Vidya Balan). But as he reads more and more about Mahatma Gandhi to keep up his deception, he begins to hallucinate that he can see Mahatma Gandhi. He starts practicing Mahatma Gandhi’s teachings as ‘Gandhigiri’ with hilarious results.

The scene in the toilet (vinamrata se), the first meeting with Jhanvi, the college scene, the paan spitting scenes, the old man getting back at the corrupt bureaucrat, Circuit talking to Gandhiji, Munna’s response after the goon slaps him twice and Munna and Circuit’s scenes in jail are all excellent. Screenplay and dialogues by RajKumar Hirani and Abhijat Joshi are excellent. The movie is filled with some of the best one liners in Hindi cinema.

Music by Shantanu Moitra is pretty good though they ripped off the song ‘Pal Pal’ from the Cliff Richard’s song ‘Theme for a dream’. The songs ‘Lage Raho Munna Bhai’, ‘Samjho ho hi gaya’ and ‘Pal Pal’ are all beautifully picturized and choreographed. Cinematography by C.K. Muraleedharan is very good.

Sanjay Dutt gives an excellent performance as Munna. He is fantastic in every scene whether he is angry and frustrated at the present day state of India, wooing Jhanvi or having a blast with Circuit. Arshad Warsi is excellent as Circuit with his great one liners and is the life of the Munnabhai series. Dilip Prabhavalkar gives a great performance as Mahatma Gandhi and deservedly won the National Award for Best Supporting Actor. Boman is ok but his performance is not as good as in Munnabhai M.B.B.S. Saurabh Shukla is good and Vidya Balan gives a decent performance. Diya, Jimmy and the rest of the cast are ok.

The movie has a message but it is not didactic or boring. Rajkumar Hirani’s direction is excellent and he uses comedy to get his message across. The movie does suffer a bit in the middle and the scenes involving Jimmy Sheirgill and Diya Mirza are a bit melodramatic. But just when you think the movie is getting bogged down there is a funny scene or a dialogue and it gets better. An emotional scene is followed by a comic scene and vice-versa.

Lage Raho Munna Bhai is one of the best Hindi movies in recent times. What’s more is that it is an original film and not inspired by any other movie. It’s a clean family entertainer with a message. Just when everyone thought that Mahatma Gandhi had lost relevance in today’s world the movie shows that his principles and methods still work. The movie inspired Gandhigiri style protests which worked and this itself is the movie’s greatest contribution.