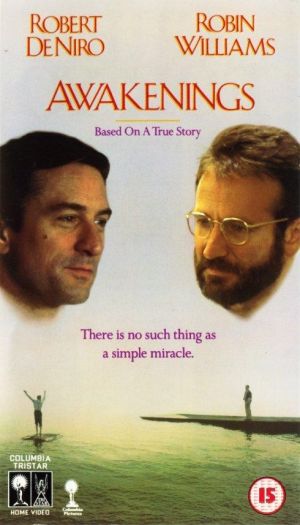 Awakenings is a true story based on Oliver Sacks’ memoir of the same name. Dr. Malcolm Sayer (Robin Williams), a shy research physician uses an experimental drug to awaken the catatonic patients who survived an epidemic of encephalitis. Leonard Lowe (Robert De Niro) is the first to receive the controversial treatment and his awakening is seen as a miracle. Encouraged by Leonard’s stunning recovery, Sayer administers the drug to the other patients only to find out that the drug has side effects and that the benefit doesn’t last. The story of their friendship during this emotional journey is what the rest of the movie is about.

The movie is not overly sentimental nor does it have a fairy tale ending. The movie deals with how the patients who came back to life after so many years and their relatives have a hard time adjusting to the new reality. Some had lost their loved ones and some had moved on during their catatonic state. This causes most of the patients to feel lonely and having been cheated of their lives.

Robert De Niro is brilliant as Leonard and is exceptional in scenes where he is trying to control his facial and body tics. He should have won the Oscar for Best Actor but it was awarded to Jeremy Irons for Reversal of Fortune. Dustin Hoffmann had won a Best Actor for playing an autistic character in 1988 and Daniel Day-Lewis had won the Best Actor in 1989 for his portrayal of Christy Brown, the Irish poet and author who suffered from cerebral palsy and may be the Academy did not want to award the Best Actor Oscar for playing a handicapped character third year in a row. Robin Williams is very good as the introverted, soft speaking doctor and the Academy should have nominated him for a Best Supporting Actor. Ruth Nelson as Leonard’s mother, Julie Kavner as Eleanor and Penelope Ann Miller as Paula and the rest of the cast all give wonderful performances.

Screenplay by Steven Zaillian is excellent and music by Randy Newman is beautiful specially the theme music. Cinematography by Miroslav Ondrícek is good. Penny Marshall’s direction is excellent and it is a surprise as to why she was not nominated for Best Directing. Awakenings received Oscar nominations for Best Picture, Best Adapted Screenplay and Best Actor for Robert De Niro.

Awakenings is a movie that might be a little depressing for some. This movie is only for those who like serious cinema based on true stories that make them think. It is emotional, touching and worth watching.