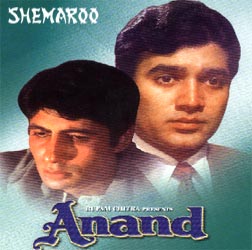 Anand is the story of Anand (Rajesh Khanna), a terminally ill patient with just a few months to live, who believes in living life to the fullest and making every one happy. He becomes good friends with his doctor Bhaskar Bannerjee (Amitabh Bachchan), who is bitter and frustrated with all the poverty and suffering that he sees. Anand’s exuberance for life and his happiness in the face of adversity changes Bhaskar and teaches him to value life. Anand also helps him win over his lady love, Renu (Sumita Sanyal).

The movie is filled with one great scene after another. Some of the scenes stay etched in your memory forever like the one where Anand yells out Murali Lal and meets JaiChand (Johnny Walker) and his explanation about friendship as transmission of signals or Anand’s interactions with the stern but motherly matron (Lalita Pawar), the climax where Bhaskar returns to find his friend dead and wants him to talk only to hear his recorded voice say a theatrical dialogue about life and ending in loud laughter. Anand calling Bhaskar as Babu Moshai is itself filled with affection, banter and teasing.

The music by Salil Choudhary is very good and the movie has some great songs like ‘Zindagi Kaisi Hai’, and ‘Kai Door Jab Din’ which were written by Yogesh and ‘Maine Tere Liye’ written by Gulzar. The songs are beautifully picturized and there are no dances involved. The movie is mostly set indoors or on sets and the cinematography just involves using a camera and letting the characters tell a great story.

Rajesh Khanna gives his career best performance as Anand and is exceptional in every scene whether he is being talkative, pensive, jovial or friendly with complete strangers. It is one of the best performances of all time in Hindi Cinema. Amitabh Bachchan gives a brilliant performance as the brooding doctor and heralds the emergence of an great actor. Sumita Sanyal, Ramesh Deo, Seema Deo, Lalita Pawar, Durga khote all deliver great supporting performances. Johnny Walker, Dara Singh and Asit Sen give memorable cameos.

Hrishikesh Mukherjee’s direction is excellent and this is his best movie. The movie doesn’t boast of any great technical finesse or great camera angles but it has a great soul. It even has a bit of a faulty screenplay as the story is narrated by Dr.Bhaskar to an audience that is gathered to award him for his book on Anand. Yet it is a simple, heart touching story with great endearing characters brought to life by great natural performances from the whole cast.