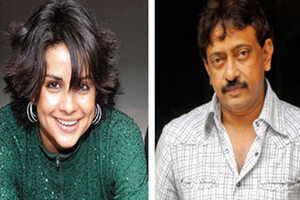 ‘Ram Gopal Varma, who usually makes headlines for cashing in on real-life incidents by incorporating them in his films, has reportedly done it again.

This time around, Mumbai Mirror has learnt that Gul Panaag’s character- a crime reporter- in the filmmaker’s sequel to Ab Tak Chappan has been inspired by slain journalist J Dey.

A unit member informed us though that Gul’s look in the film has been modeled on a freelance photojournalist that the actress has known for some years.

When contacted, Gul said, “My look as a crime reporter has been inspired by photojournalist Anuja Gupta. But it’s only the look.”

Ramu, who did not address the similarity of Gul’s role to J Dey, simply told us, “Gul fits the role perfectly. We needed a woman who can be taken seriously in a vocation dominated by men. Gul has that kind of an image.”‘