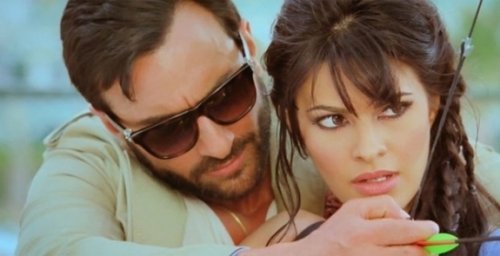 Race 2 is the cinematic equivalent of a trashy novel. It never holds together as a sensible piece of work, but as an insensible piece of work, it’s pretty enjoyable. Director-duo Abbas Mustan create a cocktail of glamorous stars, exotic foreign locations, slick action scenes, and an outrageous plot. At nearly two-and-a-half hours, the film is too long by at least 20 minutes, but I’ll give this to Race 2: it’s seldom boring.

Never deviating too far from the blueprint of the 2008 film of which this is a sequel, Race 2 pits two suave conmen against each other in a tale of friendship, double-crossings, and revenge. Saif Ali Khan returns as Ranvir Singh, a loaded tycoon with an agenda. John Abraham, meanwhile, is Armaan Malik, a criminal kingpin forever exploiting opportunities to expand his empire.

Set in Turkey, our heroes are surrounded by fast cars and sexy women, and they get rich by swindling casinos, cheating at high-value card games, and stealing prized artifacts from museums. Anil Kapoor is back as RD, former cop and ravenous fruit-eater, and Amisha Patel has replaced Sameera Reddy as his new bimbo assistant, Cherry, whose very name lends itself to a slew of double meaning jokes.

The earlier film, Race, wasn’t a particularly smart thriller, but packed with so many unexpected twists it kept you on your toes. The big reveals in Race 2, however, can be guessed from a mile away, robbing the film of any unpredictability whatsoever.

What it’s lacking in originality, the film tries to make up for in sheer ambition. Abbas-Mustan don’t skimp on any effort to deliver a fast-paced, stylish entertainer, even if much of it turns out to be a hoot. From crazy gizmos that would make James Bond’s trusted ally Q turn a shade of green, to the sheer gratuitous skin show on display, Race 2 is a guilty pleasure all the way. Leading ladies Deepika Padukone and Jacqueline Fernandes sportingly show up to show off cleavage and leg, and John Abraham and Saif Ali Khan frequently strip down to their waists in an unapologetic buffet of beefcake.

And yet, compared to so many lazy blockbusters recently, Race 2 is skillfully made and sincerely performed. It’s not a film you’ll remember years from now, but you won’t be moaning and groaning through it either.

I’m going with two-and-a-half out of five for Abbas-Mustan’s Race 2. The film has no intellectual pretensions; its only ambition is to offer a good time. In that, it mostly succeeds.