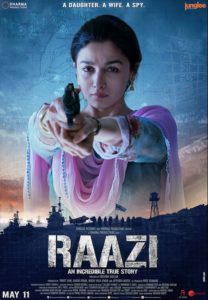 Set in 1971, when the winds of war were blowing between India and Pakistan, Raazi – an adaptation of Harinder Sikka’s novel “Calling Sehmat” – is a true-life story involving a 20 year old Kashmiri girl.

Its supposed to be based on true story but I find the whole premise of someone marrying off his daughter in some Pakistani Army family to spy for India completely unbelievable. Have googled and could not find any picture of her or any real details even though she is dead now. So I think this is just fiction being passed off as truth.

As far the movie is concerned its a decent spy thriller. Could not understand whether the movie was showing India in good light or bad light. Movie was jingoistic but in a subtle way.

The Pakistani characters were not demonized and shown as good people. There are some factually inaccurate scenes which you don’t expect from a Meghana Gulzar movie – like Sehmat being present at burial ground of her father when Muslim women are not allowed near burial grounds and Sehmat praying in a Pakistani mosque when women usually do not pray at mosques in India/Pakistan.

Spoiler Alert Sehmat keeps saying “Watan ke Aage Kuch nahin” and kills the innocent servant and her brother-in-law but and even points the gun at her husband but then has a problem when her husband is killed.

Meghna Gulzar’s direction is good and the movie keeps you engrossed even though there are repetitive scenes with cheap thrills of Sehmat spying and almost getting caught. Overall its a decent spy thriller.