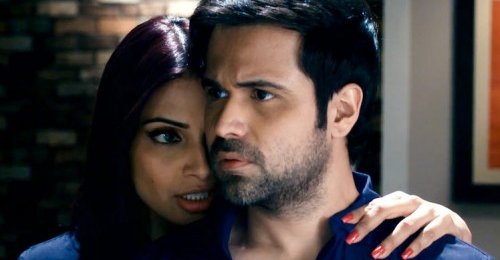 It’s hard to tell which of the two leading ladies in Raaz 3 is more severely humiliated by director Vikram Bhatt – Esha Gupta, whose character runs stark naked into a party when cockroaches crawl into her dress, or Bipasha Basu who must have sex with an evil spirit, his body covered in creepy leeches.

Surprisingly low in thrills, this third installment in the horror-movie franchise stars Bipasha as a fading film star who becomes determined to sabotage a rival actress (Esha) when the newcomer is poised to upstage her. Pledging allegiance to the dark side, Bipasha enlists the help of a spirit who shows her the way ahead. In the throes of passion, the determined diva manipulates her director boyfriend (Emraan Hashmi) into signing up for her sinister plan. Tch, tch…the things you can get a guy to commit to in bed!

Filmed in 3D but barely justifying the technology, Raaz 3 is visually flat. Bhatt employs all the usual horror-movie tropes like creaking doors, fog-filled frames, and a macabre background score…and yet the film is about as scary as a six-year-old wearing a Frankenstein mask.

To be honest, Raaz 3 has more laugh-out-loud moments than jump-in-your-seat jolts. At one point during a poignant revelation, Esha Gupta delivers this classic gem: “Bachcha aur kutta sirf pyaar ka bhookha hota hai.” In another scene, while trying desperately to calm down a hysterical woman who’s just seen a ghost, Emraan Hashmi resorts to his ever-reliable formula – he shoves his tongue down her throat!

The first half of Raaz 3 has a few inspired bits, particularly Bipasha’s chilling encounter with the spirit who empowers her to carry out her sabotage, and Emraan’s moral dilemma over participating in Bipasha’s conspiracy to destroy an innocent rival. Post intermission, however, the film nosedives into a morass of clichés including godmen and aatmas and the spirit world, and by this point you couldn’t care less what happens to these people.

It doesn’t help that the acting is laughable, particularly by the two ladies, while Emraan Hashmi just tries to keep a straight face through this nonsense. Raaz 3, unlike the director’s last film, Dangerous Ishq, isn’t even so bad that it makes you laugh…this is just dull, lazy filmmaking.

I’m going with two out of five for Vikram Bhatt’s Raaz 3. The only thing that’s truly frightening is knowing that a fourth Raazfilm is inevitably on its way.