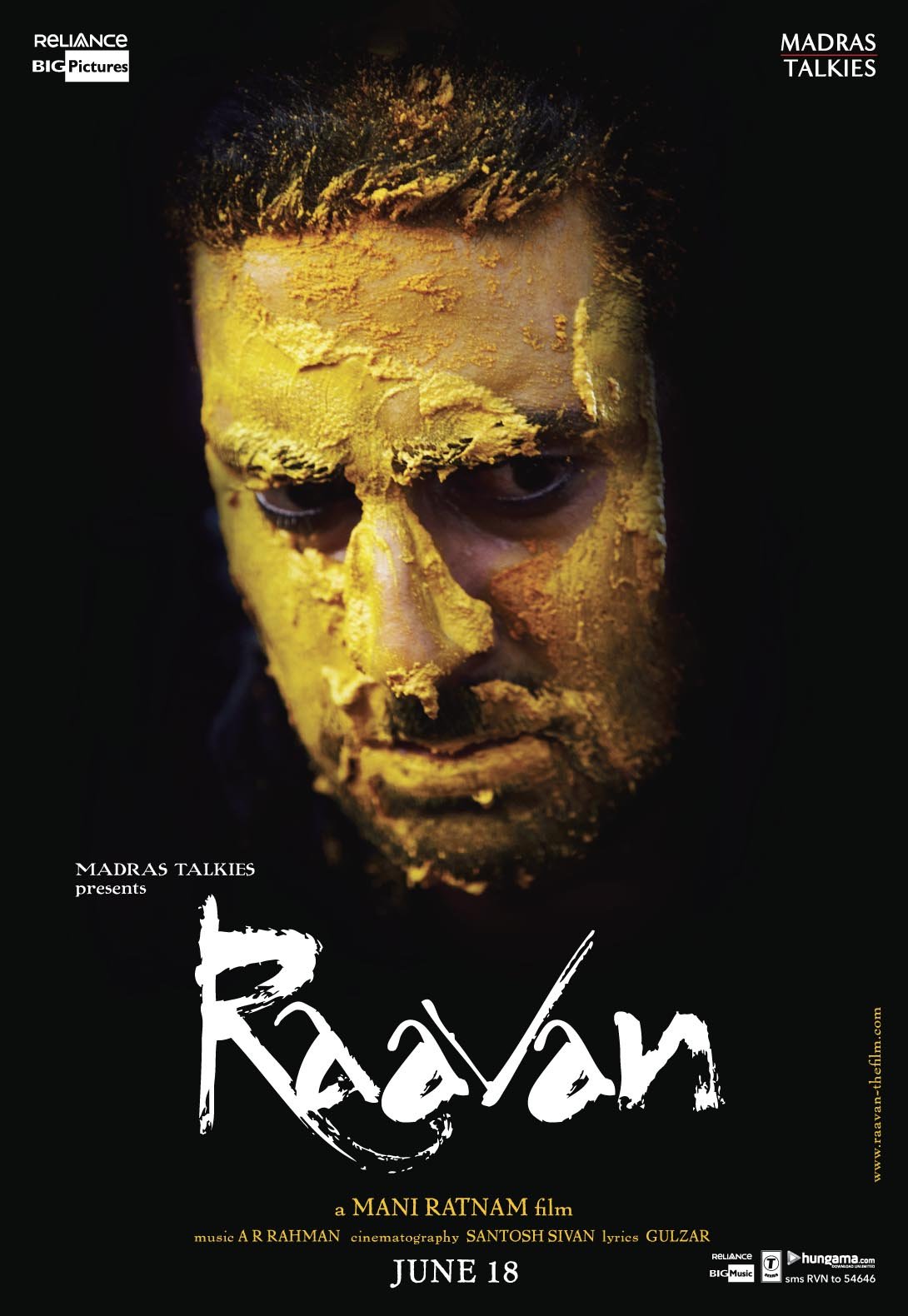 Dev (Vikram) , a SP, arrives with his wife Ragini (Aishwarya) to take up his new post in Lal Maati. Ragini is kidnapped by Beera to avenge a crime against his sister . Ragini hates Beera as evil incarnate and thinks of her husband as the embodiment of good. In captivity, Ragini learns that Beera is not all bad and her husband might not be all good. Beera also happens to start having feelings for Ragini. What happens next is what the rest of the story is about.

The initial credits are done really well and the flashback showing the reason for Beera’s kidnapping Ragini is good. The fight scene on the bridge is shot well (though a little over the top) and the twist at the end is good. By now everyone knows that the story is based on Ramayana. Ramayana was previously adapted by Subhash Ghai as Khal Nayak showing Raavan to be a good guy who was brainwashed. Screenplay of Raavan, credited here to Mani Ratnam, is horrible. We are told that Beera is a poet, he is knowledgeable and what not but we don’t see any signs of that in Beera. Ragini is brought in blindfolded and released blindfolded yet she has no problems in finding Beera. Ragini finds out about Jamuna’s ordeal and yet does not bring that up with Dev. Dev finds Beera and instead of shooting him decides to have some fisticuffs with him.

Raavan is supposed to be set in Lal Maati, a town in North India but the geography is all over the place. Initially we are shown some town but then they are living in huts in the forests. When Ragini jumps off the cliff, she does not jump but almost glides through the air. It looks so silly as if she is some character from Crouching Tiger, Hidden Dragon. Her fall is captured in slow motion as if she is some feather. What should be a terrifying scene is made to look something else. She lands on the branch of a tree but surprisingly breaks no bones and then falls to the river again in slow motion. Ridiculously Beera falls in love immediately with the song ‘Behne De’ starting to play. In one action scene, Dev is chasing Beera’s men and they all leap in slow motion.

The references to Ramayana are so unsubtle. There are dialogues like “14 Ghante” , ’14 din, 14 minute’ referencing the 14 year ‘Vanvas’ of Ramayana. Sanjeevani (Govinda) jumps like a monkey to signify that he is Hanuman and Jamuna (Priyamani) is lifted by her nose to reference the Surpanaka nose incident. The movie is filled with silly scenes like the dream scene of Ragini where she is standing and screaming for Dev to come and rescue her and another scene where she is trying to climb up this cliff with some slow background music playing.

Cinematography by Santosh Sivan and Manikandan is very good. The movie has great visuals but there are far too many camera movements. There are scenes with 360 degree camera rotation which makes one’s head spin. There are far too many slow motion shots that one might wonder if the movie should have been named Action Replay instead of Raavan. Dialogues by Vijay Krishna Acharya of Tashan fame are horrible like ‘Yeh Raavan Hai ya Robin Hood’ and some stupid dialogues using ‘Mahua’. Background music seems inspired from other movies. One theme resembles the initial background music from Akira Kurosawa’s Roshomon. It also drowns out the dialogues in some scenes.

Music by Rahman is loud. Lyrics by Gulzar are good. ‘Ranjha Ranjha’ is the best song of the album but a smaller version of it is played on Jamuna. There is another weird version of ‘Ranjha Ranjha’ with just vocals which plays when Beera and Ragini are fighting off each other. The song Beera is catchy but the African chants seem copied from some Deep Forrest album. Behne De song seems like some older Rahman song. The song ‘Kata Kata’ seems to be an updated version of the ‘Rukmani’ song from Roja. The song is set in an North Indian setting but the music seems so South Indian especially during the bit ‘Dulhe Raja Dulhe Raja’. The song ‘Thok De Killi’ is cacophonous and horribly picturized. Beera and Gang who are supposed to be tribals do synchronized dance movements copied from Michael Jackson’s ‘Thriller’ song. The song ‘Khili Re’ is picturized with Ragini doing ‘Bharata Natyam’. It seems like a song from some yesteryear South Indian movie with her dancing for her husband and teaching the kids dance.

Abhishek plays Beera, a demented version of ‘Lallan’ of Yuva. His look resembles Lallan and he even acts like him in some scenes like the flashback part. We never know if he was always like this or if he became like this due to the tragedy. He also tries to copy Heath Ledger’s ‘Joker’ act from The Dark Knight but is horrible and has dialogues like ‘bak bak bak bak’ and ‘jhik jhik jhik jhik’. He hams like anything in many scenes and is annoying and way over the top. A better actor could have excelled in the role. Aishwarya is horrible and she overacts too. She screams, screeches and squeals most of the time. When she is not doing all this she does some weird stuff with her eyes. In quite a few scenes like the last scene of the movie she gives weird expressions with her eyes. Vikram is decent though he looks like he is modeling for some sunglasses and has a South Indian accent. Govinda’s role seems to be to create some comedy but his dialogues don’t help him at all. Priyamani has a very small role as Jamuna but gives the best performance in the movie. Ravi Kishen seems to speak in an accent that nobody else does in the movie. Nikhil Dwivedi is ok.

Mani Ratnam’s direction is a mess and the movie is a confused product. On one hand it looks like he was trying to make some art movie and on the other hand it seems like he was trying to make some commercial masala movie. Mani’s best work Iruvar had great visuals too but the movie had a great screenplay, great performances (aided by good actors) and great music. Here there are great visuals but the screenplay is riddled with logical loopholes and during the first half hardly anything happens. There are scenes which are either too slow or scenes that happen too fast with editing cuts. Mani seems too enamored with the visuals and wants to create the most beautiful image and some of these are not even original. They seem to be inspired from the movie Apocalypse Now. But just beautiful images don’t make a great movie. All in all the movie is horrible.