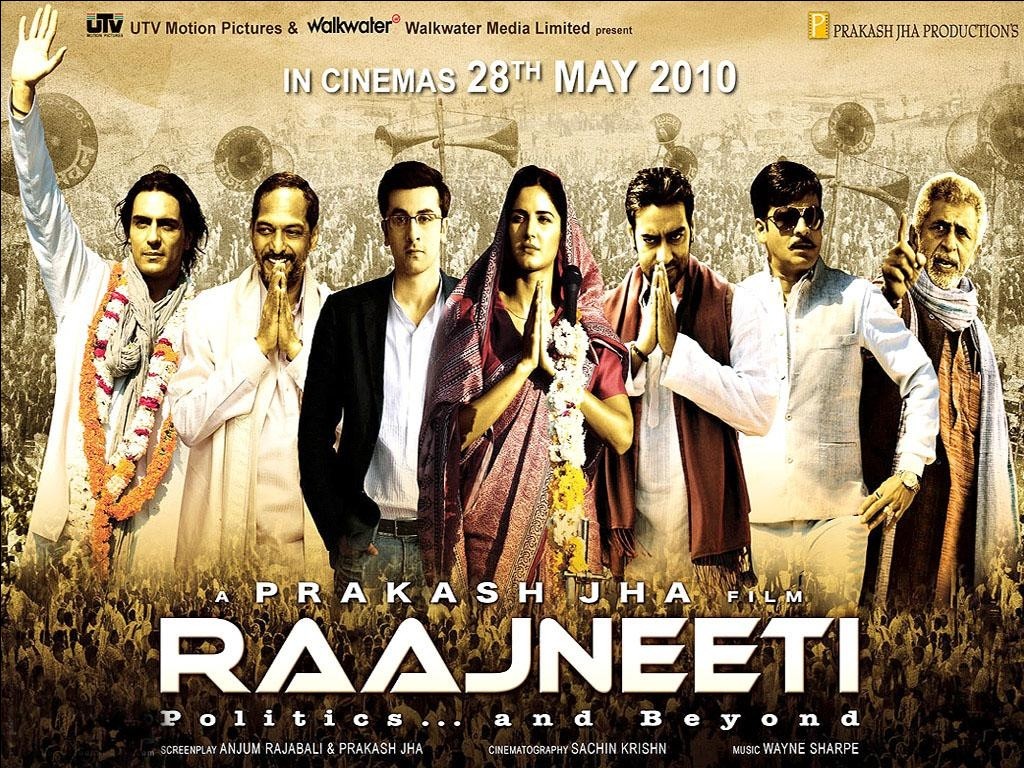 Bhanu Pratap suffers a stroke and hands over the reins to Prithvi (Arjun Ramphal), the son of his younger brother sidelining his own son Veerendra Pratap (Manoj Bajpai). Veerendra obviously does not like it. He champions Suraj (Ajay Devgan), a dalit’s entry into the party. When insulted by Prithvi’s father, Veerendra bumps off the old man. After having been thrown out of the party Prithvi and Co come up with a new party and the rest of the movie is the clash between the two parties

Now the flaws. Bhaskar does his ‘Ek Hi Bhool’ with Bharti and says it is his fault and takes Sanyas. He just leaves Bharti as well as his followers in a lurch. Bharti meets Sooraj and tells him he is her ‘Jhest putra’. Who uses words like this now? A guy is so sound asleep that he does not even know that his partner was killed in his bed (another scene rip off from Godfather). Brij Gopal can’t kill someone because he is a relative but has no problems goading someone else to kill him a few minutes later. Veerendra Pratap leaves without telling anything and his security guys don’t even follow him. Sooraj finds out where he is but does not order the security guys to come to the location. Samar ‘s reason for going to US is so silly.

Story is credited to Prakash Jha and Screenplay credited to Prakash Jha and Anjum Rajabali. Shyam Benegal had previously adapted Mahabharatha very well to the industrial milieu to create an engrossing movie Kalyug with great performances by Shashi Kapoor, Victor Bannerjee, Anant Nag and Rekha. Prakash Jha, on the other hand, adapts it to the political world to make it a massy entertainer but also shamelessly rips off a lot from the Godfather both in characterization and scenes.

Dialogues by Prakash Jha are in ‘shudh’ Hindi. They are powerful and a throwback to the time when characters used to say heavy handed dialogues. Music by Wayne Sharpe is ok but none of the songs are any good. They mostly play in the background except for a silly song in the club which thankfully stops after just a few minutes. Background music is ok. Cinematography is nothing to write about.

The big plus for the movie is that it has some very good performances. There are so many good actors in the movie but it’s surprisingly Arjun Ramphal who gets the best role and steals the show (though he goes missing for a while in the movie). Arjun Ramphal’s Prithvi Pratap is more Sunny from Godfather than Bheem of Mahabharatha. His character has so many shades. He is at one moment the man who loves his family and very protective of them and at another he is a murdering lunatic.

Nana Patekar (part Vidhur, part Krishna of Mahabharatha), who is more famous for his hysteric acting plays the cool, calm character who runs the show. He is a smiling assassin and uses his expressions to convey so much. Manoj Bajpai gets a good role after a long time and plays it somewhat theatrically. He is very good in the scene where he begs his father to revoke his decision to make Prithvi the successor and in the ‘paisa vasool’ scene of the movie – ‘Karara Jawab Milega’. Naseer shows his acting prowess in a special appearance. Ranbhir has the main role but for some reason he plays it very morose almost deadpan with no expressions. His character is somewhat badly written too. If his character was carefree and not involved in politics to begin with, then it would have been more interesting and made more sense when he suddenly got thrust into the middle but here that impact is not there.

Katrina tries to act but cant. Katrina’s voice also seems dubbed in the first 20 minutes or so. She goes on to give a speech in Hindi in her own voice but has an accent. Now why does she have a British accent when she is not playing a British girl? Moreover her hand movements and body language look funny and her face also looks very big with the big bindi. Sarah Thompson is decent. Shruti Seth is very good in a cameo. Ajay Devgan, is the actor who disappoints the most. He plays Karna from Mahabharatha but the thing is that he has done the role of the Naajayaz son a few times (Suhaag, Naajayaz, Zakhm) and also the politician a few times (Yuva, Omkara) and this character is a mix or the two characters. He sleepwalks through the movie and seems disinterested. His character is also badly written as he seems to be an idealist at first but has no problems in being with Veerendra Pratap and killing people.

Prakash Jha’s direction is very good for the most part but he turns the movie into a crime drama with all the killings. Wish Prakash Jha had not shamelessly plagiarized from Godfather. The climax and the ending is very bad. While the movie does have flaws it is gripping and has good performances. All in all its a very good movie.