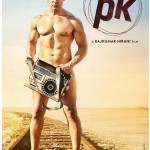 PK has had a huge opening at multiplexes recording morning occupancies of around 70%. The big cities are excellent and cities like Mumbai, Pune and Bangalore may put up record first day figures. The opening is less in some places like UP and Gujarat but the film has the highest ATP (average ticket prices) and the highest capacity ever even though the screen count is not the highest ever.

This should mean that the film should compensate for the weaker areas by huge huge business in multiplexes of big cities. Also the places like UP and Gujarat are not bad but just not as huge as metros. There block bookings from corporates for shows after 3pm also which means the afternoon and evening shows in metros will show even better occupancies.

The expectations are huge not just from an opening point of view but in the long run as the team as 3 Idiots behind them and it will be the weekdays which will decide if these expectations are met. The success of the film is not really an issue as this sort of initial almost ensures that.