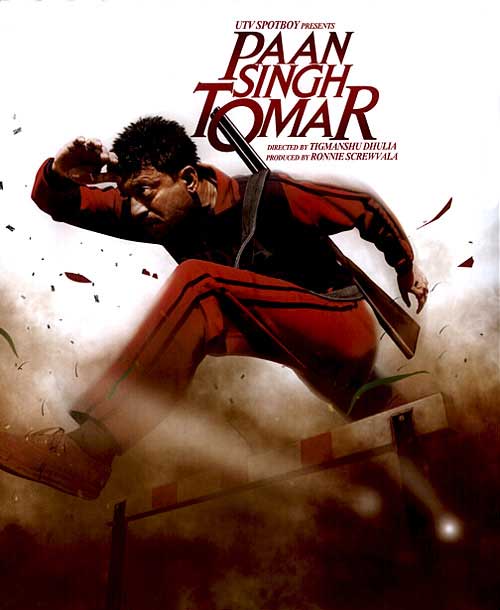 In a defining sequence in the film, Paan Singh Tomar tells his superior that his mama [uncle] isn’t a dacoit, but a baaghi [rebel]. In another sequence, during the course of an interview to a news-reporter, he makes a scathing remark, ‘Bihad mein baaghi hote hain… Dacait milte hain Parliament mein’. That, in a nutshell, sums up the persona of the long-forgotten steeplechase runner, who felt miffed by the government’s betrayal and became a dacoit of Chambal. PAAN SINGH TOMAR, a film helmed by Tigmanshu Dhulia, has taken a really lonooooong time to hit the screens, but despite the holdup, the film remains as pertinent and relevant in today’s times as it was when Dhulia envisioned it.

The Hindi film industry’s ‘dacoit fixation’ dates back to the era when dacoit films were massively admired [and accepted as well, since most of them were huge hits]. Films like JIS DESH MEN GANGA BEHTI HAI, MERA GAON MERA DESH, MUJHE JEENE DO, SAMADHI, BINDIYA AUR BANDOOK, PUTLIBAI, DACAIT and of course, SHOLAY are relished to this date. Much later, the dacoits got replaced by rebels in the 1990s. The focus shifted to cities [from Chambal and Ramgarh], the protagonist drove cars and bikes [a transition from horses]… In PAAN SINGH TOMAR, there’s Chambal, but no horses. Nor does the protagonist with bloodshot eyes breaks into a fiery dialogue that would instantaneously draw whistles.

As a cinematic experience, Tigmanshu takes us into the world of Paan Singh Tomar and enlightens us the reasons that impelled a sportsman to take law in his hands. That itself is its USP, for this is no typical vendetta fare. It is a factual account of a sportsman who brought honor to the country, but felt betrayed when he needed the country the most. In fact, Tigmanshu calls this cinematic endeavor a tribute to the sportsmen who won medals for the nation, but never got their due during the sunset of their lives. An incredible film, no doubt, but falls short of being memorable as the plot becomes another vendetta fare at some stage in the concluding reels.

Paan Singh [Irrfan Khan] was a small-town lad who went on to win the steeplechase at the national games. A series of life changing events, however, forced Paan Singh to give up athletics, pick up the gun and become a dacoit of the infamous Chambal valley.

With films like HAASIL, SHAGIRD and the recent SAHEB BIWI AUR GANGSTER, Dhulia has developed a niche spectator base. In PAAN SINGH TOMAR, Tigmanshu makes the biopic attention-grabbing by being focused on the motive that provoked Paan Singh to revolt and pick up the gun. The uphill task of making a biopic is palpable as Tigmanshu attempts to recapture the life and times of the athlete on celluloid. Given that Paan Singh’s bio-data was multihued, Tigmanshu has depicted the character’s life, from the time he joined the armed forces, became an athlete, to the spat with his relatives and picking up the gun. The graph from a young man to middle age, till about 50 years, Tigmanshu has encompassed it well in those two hours, picking up fundamental occurrences from his life, thus making an entrancing motion picture. In fact, the reason that pressed Paan Singh to pick up the gun comes across emotively and sensitively.

The lone aspect that weighs the film downward is the fact that the narrative totters in the middle of the second hour, when the story doesn’t really move frontward. Of course, one also comprehends that when you attempt a biopic, you have to stay true to the incidents that transpired in that person’s life, but a cinematic adaptation can exclude a few episodes that aren’t too imperative. Tigmanshu could’ve done that. Having said that, I’d like to add that PAAN SINGH TOMAR is yet another masterstroke from a consummate raconteur. The film seizes your attention for most parts and as you exit the screening, it’s with a heavy heart, with a tinge of melancholy, which only indicates that the storyteller has succeeded in engaging your interest to something he wished to emphasize on.

The cinematography [Aseem Mishra] is truly attention-grabbing, while the editing [Aarti Bajaj] is razor-sharp. The background score [Sandeep Chowta] is most appropriate. It augments the impact of numerous sequences.

Taking on a biopic is akin to a challenge of sorts for the actor since he/she has to visit a part they may be unaware of, yet have to portray it with tremendous passion. Irrfan, an actor of standing, essays the character with aplomb. Very evidently, the actor has trained rigorously with steeplechase coaches, since the role requires him to partake in this sport. At the same time, the role must have been physically and psychologically demanding and I yearn to affirm that Irrfan appears remarkably forceful in this complex part.

Mahie Gill is an incredible talent and it comes to the fore yet again in this film. Two more actors who leave a solid impression are Vipin Sharma and Rajendra Gupta. Both excel in their respective characters. Nawazuddin Siddiqui sparkles in a brief role. Imran Hasnee is first-rate. The actor enacting the role of Paan Singh Tomar’s son is effective. Brijendra Kala is fantastic as the news-reporter.

On the whole, PAAN SINGH TOMAR shatters the standard rules of this genre. Besides, the film makes you cognizant that serious cinema can be uniformly delightful, like any other enthralling entertainer. If this variety of cinema allures you then chances are that you will take pleasure in watching PAAN SINGH TOMAR. Recommended!