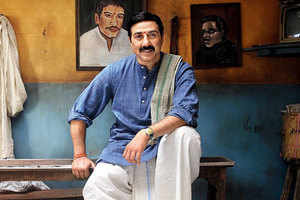 After “Mohalla Assi”, Sunny Deol will again be seen in a Banarsi avatar in Neeraj Pathak’s “Bhaiyaji Superhit”. The film, which will be shot in Varanasi and Ramnagar from March onwards, is an action comedy with Sunny reportedly playing a Banarasi don, who wants a film to be be made on him

“I wanted to make a UP-based story and so I thought that Varanasi was an apt place to shoot. Also, my film has a lot of colour, and to top it all the story is woven around the city. So, right from the dialect to the attitude, a lot of Banarasi characters embracing all this are in the film.” According to Pathak the film will go on floor once the elections are over in UP.

Neeraj, who had visited the city twice last year while doing recce for the film, says, “Sunny will be in a never-seen-before avatar, and I want to keep it a surprise for the audience. As far as the other cast goes, we have decided on Ameesha Patel as the main lead since Sunny and Ameesha make the best pair on screen. They are coming together after nearly a decade. Actually, we want to recreate the magic of “Gadar” in our film. Apart from Sunny and Ameesha, the film also stars Arshad Warsi and Tusshar Kapoor, and the direcor says Priety Zinta is also being considered for a role. Pathak and Sunny have last worked together in “Right Yaaa Wrong”. Another interesting thing, from a UP perspective, according to the director, is that the film will have an actor from UP, Pankaj Tripathy, seen recently in “Agneepath”, playing an important role.