Movies You Watched This Month – February 2014 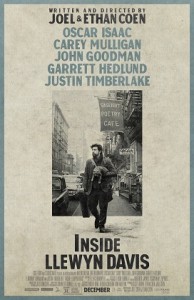 Official Synopsis: Inside Llewyn Davis follows a week in the life of a young folk singer as he navigates the Greenwich Village folk scene of 1961. Llewyn Davis (Oscar Isaac) is at a crossroads. Guitar in tow, huddled against the unforgiving New York winter, he is struggling to make it as a musician against seemingly insurmountable obstacles—some of them of his own making. Living at the mercy of both friends and strangers, scaring up what work he can find, Llewyn’s misadventures take him from the baskethouses of the Village to an empty Chicago club—on an odyssey to audition for a music mogul—and back again.

The movie is based on the memoir of folksinger Dave Van Ronk “The Mayor of MacDougal Street” and the title of the movie is from his album Inside Dave Van Ronk but all the important characters are inspired from different real life folk singers. Those interested can read this excellent article from Slate on The People Who Inspired Inside Llewyn Davis. Link

Some scenes were very good like the one where he lashes out at Mrs. Gorfein for singing his dead partner’s part or the “Please Mr Kennedy” song scene and the drive scene to Chicago or the scene where he demands the dues that he paid. The soundtrack is very good and all the songs are played in full and were performed live. There is the famous 500 Miles song also. Cinematography is very good capturing the 60’s New York and has been nominated for an Oscar for Best Cinematography.

Oscar Isaac is excellent as the struggling folk singer coming to terms with his partner’s death and braving the cold winter and living on other people’s couches. His character is also obnoxious sometimes and so one does not feel that much sympathy for him. Carey Mulligan is good as the woman he knocked up and who hates him. Justin Timberlake is good in a small cameo. John Goodman is good as the garrulous Roland. Garrett Hedlund is good as the laconic poet.

This is not a movie for everyone though and many might find it boring and even hate it. The final scene might also confuse some. The movie is essentially a homage/tribute to the 60’s folk singing era and the singers who are too sincere to compromise. People who are well versed with the songs and singers of that era would be able to appreciate the movie more.