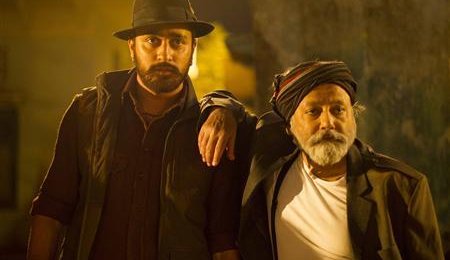 If it’s true – what director Vishal Bhardwaj would have us believe in that cheeky anti-smoking disclaimer that precedes Matru Ki Bijlee Ka Mandola – that too much of anything, even water and lemon, is harmful, then the filmmaker evidently doesn’t practice what he preaches. This outrageous comedy after all shows little concern for our health as it delivers laugh after side-splitting laugh.

Matru Ki Bijlee Ka Mandola might well be described as Bhardwaj’s holiday movie – a mad story with crazy characters – but fortunately for us, even in a light mood, the director can be counted on to say interesting things.

In a fictional village in Haryana, the wealthiest resident, Harry Mandola (Pankaj Kapur), has conspired with a cunning minister (Shabana Azmi) to usurp the poor villagers’ farmlands so he can build an industrial plant. Harry has a drinking problem, but he’s a better man when he’s under the influence, sympathizing with the villagers’ condition, even going so far as to lead a procession against himself one intoxicated night. His Man Friday, Hukum Singh Matru (Imran Khan), has been hired with the sole purpose of controlling Mandola’s drinking habit, but that’s easier said than done. Meanwhile, in an alliance that would benefit both sides, Mandola has gotten his motherless daughter Bijlee (Anushka Sharma) engaged to the politico’s dimwit son (Arya Babbar).

From hallucinations about pink buffaloes to a potentially fatal drunken flight, the film’s humor alternates skillfully between the inventive and the slapstick, seldom striking a false note. His tongue firmly in cheek, Bhardwaj also takes pointed jabs at the nexus between those in power and those with deep pockets, making a case for the oppressed rural population often stuck in between.

Not one to dumb down the material for a wider audience, the filmmaker throws in clever references like that brass band shop in the town square named Kusturica, or the savior of the downtrodden, named after a Communist icon. In other scenes Bhardwaj is more direct, like that one in which the scheming minister, while berating her no-good son, gives him the example of real political heirs who caused their parents little trouble.

Aided by an excellent music score packed with hummable gems, and working off a terrific, layered script, the director sketches his quirky characters lovingly, giving them soul so you form a sense of real attachment to them. The chemistry between Mandola and Matru is magnetic…witness that scene in which they decide to punish a well for standing in their way. Bijlee, for all her brashness, reveals real pathos simmering beneath the surface, particularly in her scenes with her father.

But it’s not just the principals, Bhardwaj handles even side characters with great affection, giving them little moments to make an impression…like Matru’s trusted eunuch friend, the blind boy sporting Aviators, and the local doctor’s overweight wife who misunderstands Mandola’s buffalo obsession.

If there’s anything that feels contrived, it’s a scene between Matru and an old college friend he taps for help, or the broad strokes with which the director caricatures Azmi’s corrupt minister, although the actress herself gives a deliciously evil performance. The language and accents in the film feel unfamiliar, and take some getting used to. It’s impossible to catch every joke and dialogue, which is a pity given that the writing is so rich.

Of the cast, Anushka Sharma is dependably feisty yet achingly vulnerable, breathing life into the conflicted Bijlee. Imran Khan, for his part, offers a solid, confident turn, owning the character of Matru completely, holding his own even while acting off a veteran like Pankaj Kapur.

The film, not surprisingly, belongs to Kapur, who never misses a beat as the paradoxical Mandola. It’s wonderful how he’s particularly lucid when he’s drunk, making the most sense in this senseless state. But it’s Arya Babbar who catches you completely off-guard with a delightful performance as the politico’s daft son. Watch how he “gifts” his fiancée a Zulu dancing troupe, or even his late reactions to his mother’s sinister brainwaves…the actor is the surprise packet in this charming film.

Returning to form after the disappointing Saat Khoon Maaf, Vishal Bhardwaj gives us a film that’s enjoyable and relevant in equal measure. I’m going with four out of five for Matru Ki Bijlee Ka Mandola. The year’s first gem has arrived – don’t miss it!