Check out this old rediff article on Manoj Kumar on his birthday. 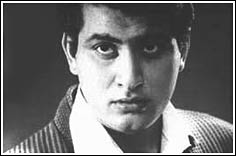 Harikishen Goswami rechristened himself Manoj after his idol Dilip Kumar’s character in Shabnam.

Manoj could have remained a wannabe Dilip Kumar. But destiny and experience conspired to stoke the creative fires within the often-contemplative young actor.

After a string of hits as an actor-filmmaker, Manoj carved a strongly individualistic niche for himself.

So strong was his identity that he became synonymous as Mr Bharat, the patriot. The success of Shaheed (1965), a biopic on the martyr Bhagat Singh, became a beacon for the direction his career was to take.

Manoj’s cinema encompassed popular ingredients — melodious songs, a surfeit of glamour and jingoistic dialogue — that infused the audience with nationalistic pride. His flair for imaginative camera angles (he once held up the shooting of Upkar for days till he got the right light for a shot), is reflected in the work of many a young director, but Manoj also emphasised content.

By contrasting the inherent richness of Indian tradition (Upkar, Purab Aur Paschim) with the materialistic Western society (often a selective view), Manoj had multitudes reaching out to shake his flag-waving hand.

It was not always a cakewalk. It took Manoj Kumar five long years to graduate from a struggling actor who ghost wrote for a pittance, to one of the sultans of showbiz. After coming down from Delhi, he had small roles in Panchayat, before ascending to hero in Honeymoon (1960) opposite Sayeeda Khan.

He decides to open a dispensary in the village and becomes a hero for the locals as well as for vivacious village belle Mala. Manoj exuded an almost palpable sincerity that was to turn into a major asset in his subsequent films. Destiny seemed to be charting a course of a romantic hero for the shy Manoj Kumar who had a strange way of drawing attention to his handsome face — he spread his fingers over his face like the tentacles of a baby octopus.

But Shaheed (1965) gave an unexpected turn to his career. He was flooded with accolades for his straight-from-the-heart performance which was almost devoid of any Dilip Kumar mannerisms. Prime Minister Lal Bahadur Shastri praised the film and enthused Manoj Kumar to make a film on the Jai Jawaan Jai Kissan slogan.

The slogan shaped into Manoj Kumar’s offical debut as a director Upkar (1967), where he believably played both a jawan and a kisan. A huge hit, Upkar made Manoj an authority on screen patriotism even if it circumscribed his acting choices later in his career.

In the late 1960s and early 1970s, Manoj dabbled with roles of a doomed lover (Aadmi, Do Badan), a befuddled spectator in thrillers (Anita, Gumnaam, Saajan), and even a flirtatious romantic hero (Patthar Ke Sanam).

But it was as the patriot that he prevailed at the box-office, courtesy Purab Aur Paschim (1970), a film proselytising the virtues of the East; Roti Kapda Aur Makaan (1974), a tale of an unemployed youth temporarily succumbing to the lure of the lucre before cleansing himself and the system; and Kranti (1981), a film set in the previous century that glorified the struggle for an independent India.

Manoj liked taking chances. In Upkar, he daringly presented villain Pran in the sympathetic role of Malang baba. At the height of his success, Manoj made the offbeat Shor (1972), where he lamented the disturbing decibel level of ‘noise’ in our lives. The film failed to create a din at the turnstiles. Manoj Kumar fans were clamouring to see him in the Bharat mould.

Manoj liked taking chances. In Upkar, he daringly presented villain Pran in the sympathetic role of Malang baba. At the height of his success, Manoj made the offbeat Shor (1972), where he lamented the disturbing decibel level of ‘noise’ in our lives. The film failed to create a din at the turnstiles. Manoj Kumar fans were clamouring to see him in the Bharat mould.

Increasingly, Manoj too chose to stay within the confines of his Mr Clean image. He even kept his heroines largely at arm’s length. In fact, in Sanyasi, Manoj seemed to almost parody his own image by thwarting an amorous Hema Malini’s advances with Kyon hum jaaye mandir main, paap hai tere andar mein. Ram naam dhun hum gaayenge.

Three hits in three consecutive years in the mid-1970s — Roti Kapda Aur Makaan (1974) Sanyasi (1975) and Dus Numbri (1976) — made Manoj seem invincible. With Kranti (1981), Manoj realised his ambition of directing his idol Dilip Kumar. The film, though received indifferently by critics, was a hit. But when Manoj made Clerk (1989), the gravy train came to a screeching halt.

Clerk was filed away as forgettable due to miscasting (imagine Rekha and Manoj as college students, even if it was only in a flashback), and much maudlin melodrama. Jai Hind (1999) saw him showcasing his son Kunal Goswami, but the direction was a pale shadow of his former self.

Over the last decade, Manoj has not been able to find his way back to big time again (an offer to write Sunny Deol’s 23rd March 1931 — Shaheed fell through at the negotiation stage itself). But the multi-talented Manoj — he designed eye-catching posters for Woh Kaun Thi, penned lines for himself in Raj Kapoor’s magnum opus Mera Naam Joker (with Raj Kapoor’s consent, of course), and collaborated anonymously on Sohanlal Kanwar hits like Pehchaan, Beimaan, Sanyasi — cannot resign himself to memories, golden though they may be.

When asked why he directed such few films, the veteran once rather caustically remarked, ‘Dogs litter, a lioness deliver cubs.’ Can we expect to hear the lion’s roar Kumar once again?