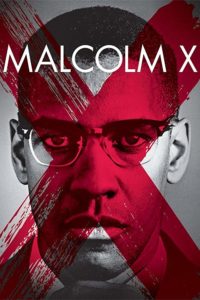 Spike Lee’s Oscar-nominated film illuminates the life of black nationalist Malcolm X, following him from his early days to his conversion to Islam. He hit bottom during his imprisonment in the ’50s, he became a Black Muslim and then a leader in the Nation of Islam. His assassination in 1965 left a legacy of self-determination and racial pride.

The movie is almost 3 and a half hours long. It doesn’t just skim through the different phases of his life. It actually spends lot of time on them – how as a teenager he would try to have his hair styled like a white person and how he had a White girlfriend, his working on a illegal numbers game, his life committing robberies, his life in jail, his conversion to Islam and joining the Nation of Islam, his life as a fiery preacher for Nation of Islam and hating all Whites, his eventual breakup with Nation of Islam, his going on Haj and realizing that Muslims are of all colors and him moving away from his previous anti-White message.

Denzel Washington was excellent as Malcolm X in his career best performance. He was deservedly nominated for an Oscar for Best Actor. He actually should have won the Oscar but Al Pacino won it for Scent for a Woman. Al Pacino may have won because he had not won despite 6 nominations earlier. Angela Bassett was very good as Betty Shabazz. Albert Hall was good as Baines. Al Freeman, Jr. was good as Elijah Muhammad. Delroy Lindo was good as West Indian Archie. Spike Lee was good as Shorty. Theresa Randle was good as Laura and looked pretty. The rest of the cast was good too.

Spike Lee’s direction was very good. The movie is made like an Epic encompassing Malcolm X’s whole life. The movie feels very well researched. This is probably the only mainstream American movie which shows the important points of the Haj journey. It is not a hagiography. It doesn’t try to portray Malcolm X as all good. Malcolm X is a must watch for anyone who is interested in civil rights.