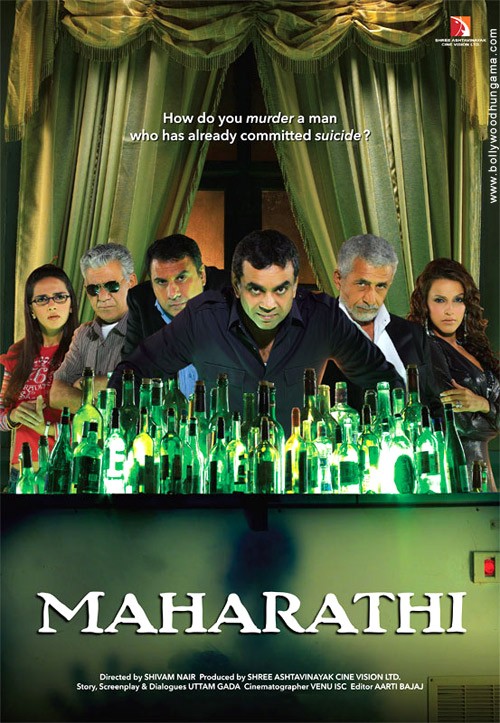 Maharathi is a movie made from a Gujarati play which should have remained a play. It is one of the stupidest movies you will ever see. Imagine putting a dead body in a freezer in the hallway without a lock so that no one would be curious about it. The movie is filled with silly logic like this and talk about miscasting. Paresh Rawal, a 58 year old, plays a unmarried guy in his twenties or thirties. He saves Naseeruddin Shah, an alcoholic ex-producer from death and is rewarded with a job of a driver. Naseeruddin Shah commits suicide but his wife teams up with Paresh Rawal to usurp the insurance money by showing the suicide as murder. Talk of resemblance with the Urmila track from EMI.

Neha teams up with Boman Irani, the lawyer for Naseeruddin Shah to double cross Paresh Rawal but instead ends up getting killed. Om Puri and Vivek Shauq investigate the murder while Paresh Rawal and Boman Irani try to get the money. This is what the movie is about. The movie is filled with stupid scenes with respect to the freezer. Tara Sharma, walks in her sleep and goes about removing the empty bottles placed on the freezer while Paresh and Neha keep putting the bottles back.

Paresh Rawal is becoming annoying with his same dialogues and is totally miscast. The role should have gone to some youngster instead of him. Naseer is ok but has hardly anything to do than look drunk. Neha is annoying with her high pitched voice yelling. Tara Sharma is annoying in her dumb bimbo role with that little girl’s voice. How she manages to get roles with her dialogue delivery and voice is a puzzle. Om Puri is wasted and Boman is ok.

The movie is slow paced and looks like it was totally made on sets. You feel suffocated after a while. If the director wanted to adapt it from stage to screen he had to first change the story and renmove those stupid illogical scenes and shoot some scenes out doors. Shivam Nair’s direction is average and he does nothing to fasten the proceedings or make it interesting.