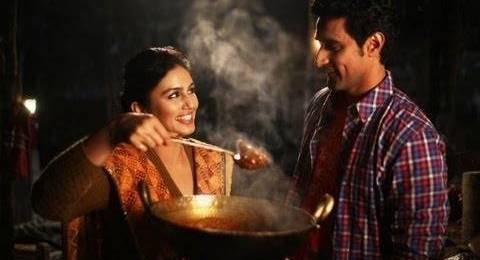 Like some culinary concoctions that take forever to stew before they’re finally ready, Luv Shuv Tey Chicken Khurana is a satisfying and enjoyable film, even if it does take its own sweet time to come together.

Kunal Kapoor stars as Omi, a young man who has failed to do much with his life, despite having stolen from his home and moved to London in search of better opportunities. When a local goon he borrowed 50,000 pounds from demands his money back, Omi returns home to his village in Punjab, hoping to somehow procure the cash from his family.

An orphan since he was a little boy, Omi is welcomed back warmly by his doting aunt and the cousin he grew up with, even if his uncle remains stubbornly suspicious of him. His ageing grandfather, meanwhile, is losing his mind, and as a result, the thriving dhaaba he once ran has remained shut for months. Left with no other option, Omi realizes he must figure out the secret ingredient in his grandpa’s signature dish, Chicken Khurana, and sell it to a rival restaurateur in exchange for big bucks. There is also the question of his childhood sweetheart (Gangs of Wasseypur’s Huma Qureshi), now a local doctor, who is engaged to his cousin.

First-time director Sameer Sharma roots his story in a Punjab that feels real and recognizable, with all the dust and grime; a far cry from the glossed-up Punjab of big-banner Hindi films that only tend to focus on mustard fields and bhangra nights. He populates the landscape with quirky but delightful characters like the pot-smoking god-woman (a terrific Dolly Ahluwalia), the son of a local underwear-store owner who aspires to break out of the family business (Mukesh Chhabra), and my favorite – Titu mama, the loutish brother of Omi’s aunt (played by an excellent Rajesh Sharma), who has a knack of saying all the wrong things at the wrong time.

The film’s one key problem is its snail-paced screenplay that hobbles along lazily before coming to the point. Repeated flashbacks contribute little to the film’s central premise, and there are too many indulgent distractions, particularly in the first half, that challenge your patience.

If the film still works despite these hiccups, it’s because Sharma and his writer Sumit Batheja know the world they’ve set up and their characters intimately. They gives the film a nice, lived-in texture, and to their characters they give crackling dialogue, mining many laughs simply from their interactions. It helps that Sharma has a strong cast of actors who infuse real feeling into their parts, particularly Huma Qureshi who shines as the feisty doctor still hurting from betrayal.

In the end, Luv Shuv Tey Chicken Khurana is a warm and fuzzy comedy that benefits from the insider’s eye that the director casts on this garrulous community, and their love of food and family. At 2 hours and 15 minutes, the film feels bloated and over-long, but stay with it and you won’t regret it.

I’m going with three out of five for director Sameer Sharma’s Luv Shuv Tey Chicken Khurana. All that talk of food will make you very hungry when the lights come back on again.