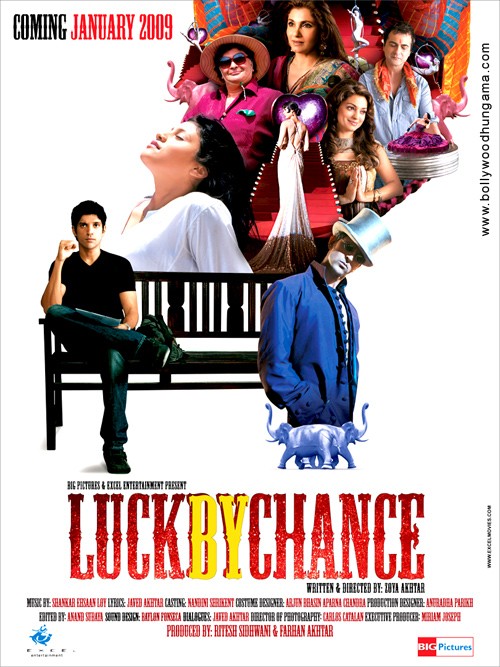 Luck By Chance is the story of Vikram Singh’s (Farhan Akhtar) struggle and how he becomes a star. He doesn’t beleive in luck and believes that opportunities have to be created and that one has to seek stardom. He falls in love with Konkona who is a struggling starlet who does small roles and is waiting for the big break that a sleazy producer has promised her. He goes to an acting course and does a portfolio. As luck would have it Zafar Khan (Hrithik Roshan), the superstar walks out of a movie being produced by Romi Rolly (Rishi Kapoor) and he gets the lead role in the movie.

Farhan is excellent as a struggler who manipulates his way to stardom. Konkona is good and looks glamorous in some scenes for a change. Rishi Kapoor is excellent as the producer. It is his best performance after Karz and he is a sureshot nomination for Best Supporting Actor. Dimple is excellent as the has been star. She is very nice and lovely one minute and very dominating the next minute. She is a sureshot nomination for Best Supporting actress. Sanjay Kapoor is good as the director. Isha is good as the star kid and Juhi is ok.

Hrithik is disappointing in the role of a superstar. As for the rest of the cameos Anurag Kashyap is the best. He is excellent when he narrates a different ending of the movie or when he is correcting Isha’s accent. Shankar Ehsaan Loy’s music is disappointing. All songs are bad except for ‘Sapnon Se Bhare Naina’ which is decent. The songs aren’t picturized that well too. Zoya Akhtar’s direction is good but the movie is boring at times. Only people who love movies and who follow the movie industry very closely will be able to understand and appreciate the humor in the situations. She succeeds in extracting great performances from the whole cast but she messes up the ending big time.

SPOILER ALERT! STOP Reading if you don’t want to know the ending. The whole movie is about Farhan Akhtar but suddenly the woman in Zoya takes over and decides Konkona is the main lead and dispenses off Farhan. People go to the movie to see a happy ending and not see the director make a feminist statement. If she wanted to end the movie that way there was no need for that Shahrukh cameo in the movie and Farhan meeting Konkona. She should have just let Farhan be a manipulator with no regrets.

The movie inspite of great performances and subtle humor is slow at times and you get the feel that you are watching the making of a movie or a TV serial. The ending definitely leaves a sour taste in your month. You can’t help but think that it is a opportunity wasted and like the guy in Rock On says ‘much much better ho sakta hai’.