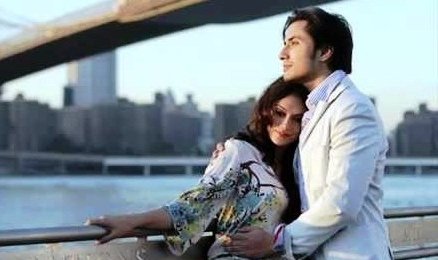 If you’ll believe that a couple can fall hopelessly in love after spending only three days together in seven years, perhaps you’ll buy the many contrivances of London Paris New York.

Spoilt rich kid Nikhil (Ali Zafar) and philosophy-spouting Lalitha (Aditi Rao Hydari) meet while disembarking from a flight at Heathrow and proceed to spend the day together exploring London, before Lalitha heads off to New York the next morning. They meet again in Paris two years later – Nikhil is working towards becoming a filmmaker now, and Lalitha is a political-science exchange student. The couple rekindles the old flame, then breaks up, all in the course of one day. When Nikhil seeks her out in New York five years later, they’re older and wiser, and must make some tough decisions before he heads home the following day.

London Paris New York, written and directed by first-timer Anu Menon, features no other characters (save for a cousin and a father who appear only in one scene each), so the film rests solely on the protagonists and the shaky relationship they share. Borrowing the tone of the Before Sunrise and Before Sunset films, the dialogue here is mostly conversational in nature, although there are times the lines feel labored and over-written. An entire back-story involving Nikhil’s dead brother serves no purpose other than to give his character some cheap redemption in the end.

You’ll notice there’s a rushed feeling to each encounter between the couple, beginning with the manner in which they unload their lives while waiting for their baggage at Heathrow. It’s as if the director was racing against the clock, desperate to cram as much as she could into each of the film’s three episodes. The Paris chapter, as a result, comes off as particularly contrived because you’re never able to wrap your head around Lalitha’s absurd behavior.

What the film has going for it, however, is its breezy vibe, and the crackling chemistry between its leads. The humor, initiated mostly by Nikhil, isn’t of the laugh-out-loud variety, but includes some clever zingers…like the nickname he gives her – Lalithapedia – for her tendency to stock useless information on just about everything. There’s a refreshing frankness in the way the couple discusses sexual attraction; and a spontaneous outburst from Nikhil in a pre-climax scene in New York is superbly written and nicely performed.

Ali Zafar and Aditi Rai Hydari infuse energy into their roles, but there are portions where their acting comes off as affected. Ali is particularly charming, especially in the comic bits, but would it really have hurt to grow a goatee for the Paris episode instead of painting one on? For her part, Aditi is lovely in almost every frame, except when she has that awful short wig perched awkwardly on her head. Her character, unfortunately, is poorly etched, and as a result Lalitha often appears whimsical and annoying. Together, however, they make sparks fly. Whether squabbling or simply being cute, the actors grab your attention in those tiny little moments that perfectly capture their delicious compatibility, making it hard to take your eyes off them.

The film itself cruises along inoffensively despite the potholes, clocking in at a crisp 100 minutes, and is aided by some snazzy camerawork and hummable songs. I’m going with three out of five for writer-director Anu Menon’s London Paris New York. The charismatic actors rise above the flawed script to deliver an easy, enjoyable evening at the movies. Watch it for its freshness; you won’t be bored.