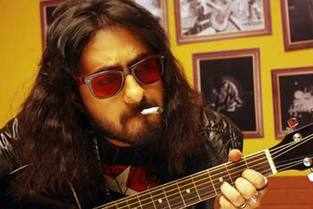 Story: In the big bad city of Mumbai, four people are on a 24-hour mission to survive. Some make it, some don’t. Caution: If you thought a drive down Mumbai’s over-flooded, potholed roads was a nightmarish experience, sample this.

Movie Review: Salman (Kay Kay Menon), son of a one time underworld biggie ( Jackie Shroff, in a flash of an appearance), is on a mission to nail the murderer of his parents, even before he’s started mourning their sudden death.

ACP Chautala (Manu Rishi) is chided by his bully boss and packed off from the capital city to Mumbai’s underbelly, to track four Nigerian drug peddlers (referred to as kaale throughout the film). The gold medalist cop, who prides himself on being Haryane-da-sher, cruises his way around Mumbai’s gallis with ease, but struggles with Mumbaiyya lingo.

Amol Ganguly (Ranvir Shorey) quits his job as a chef in UK and dashes back to Mumbai to his beloved, only to find out that she’s ditched him for an ugly millionaire. Distraught, he seeks comfort in his wannabe rockstar friend, dope-head Ajoy Ghosh (Pradhuman Singh), who walks around in boxers with sazaa-e-maut tattoo on his back, chants ‘The Bengali will rock’, has ‘Mother Chucker’ sprawled on his walls, scratches his privates (yuck!) and ‘Doogle’-searches ways to commit suicide, for his heart-broken Bong buddy. Chandigarh ki chori, Dolly (Neha Bhasin), a struggling starlet is on a mission to dupe Mumbai’s rich men to recover some of her losses (money and dignity). They all converge at the shady Hotel Plaza, amidst bullet showers, purposeless blood-baths, and a climax that leaves an after-taste of stale vada pau.

Ranvir Shorey, as the loser boyfriend looks the part, but only for a few scenes. He loses steam along the way, and boringly finishes the rest.
Much-caked-up Menon, tries hard to force intensity, but fails to evoke any emotion. Amidst all this mayhem, Manu Rishi breathes some life and laughs in this movie. Pradhuman Singh as a pseudo rockstar is exaggeratedly stereotyped, driving us to hair-tearing moments. In her debut film, singer Neha Bhasin, looks desperate to make a mark, but has slim chance.

For eons, Mumbai has spurred creativity in filmmakers. Some good, some bad. Some grossly confused. Like this one. Director Rakesh Mehta tells a story which is more cramped with characters than Mumbai’s local trains. The dialogues are unmoving and script more disoriented than the city’s unbearable traffic. While trying to create a montage of a struggling day in the life of Mumbai, the real story is stuck in some galli of Crawford Market.

Watch it at your own risk, but remember, we warned you. Given a choice, we’d like the real city and a drive on Mumbai’s roads – it probably has fewer potholes than this story.