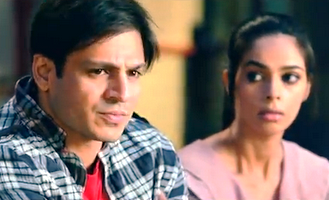 A hapless fellow finds his life turned upside down, and all kinds of degenerates hot on his trail, when he misses the last train home one night. Writer-director Sanjay Khanduri rejigs the premise of his quirky 2007 film, Ek Chalis Ki Last Local, but with far lesser success in the appropriately titled KLPD…although that’s meant to stand for Kismet Love Paisa Dilli.

The protagonist here is Vivek Oberoi, playing smarmy but harmless Dilliwala, Lokesh Duggal, who follows after a pretty young thing (Mallika Sherawat) from a party to the nearby Metro station, hoping to score. Unknown to him, a tape has been snuck into his waistcoat pocket that is being coveted by everyone from a sinister politician and some corrupt cops, to a youth party seeking to expose the politician. Along the way Lokesh has an unfortunate run in with a restaurant’s desperate delivery guy (LSD’s Anshuman Jha), and a gang of petty thugs led by a slap-happy boss (Ashutosh Rana) looking for some excitement on his birthday.

Despite a promising start, KLPD quickly coagulates into a toxic mess, because there’s little else to the film aside from a string of never-ending chase scenes, and uncomfortable jokes on everyone from gays to sardars. Khanduri is an equal opportunity offender, who revels in making you squirm as he delivers gag after tasteless gag involving rape or urine.

There’s little to recommend here apart from the occasionally clever dialogue, and some moments – very few – that are genuinely funny. What the film sorely lacks is an element of unpredictability – that one key quality that made Khanduri’s earlier film stand out. Teasing you with at least three instances where you think the film is finally over, KLPD goes on and on and on, and climaxes in an underwhelming finale with a forced patriotic message. Even the performances are nothing to write home about, and it’s a bit of a stretch to cast Mallika Sherawat as a simple, helpless girl. Vivek Oberoi plays the horny opportunist convincingly, but the film doesn’t exploit that beyond a point.

I’m going with one-and-a-half out of five for KLPD. It’s a tiring film that tests your patience. Watch it at your own risk.