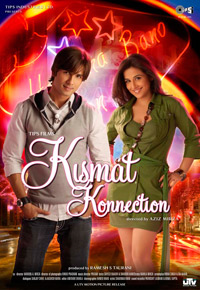 Kismat Konnection is about Raj Malhotra (Shahid Kapoor), a struggling architect who was a brilliant student in college. Its been five years since college and he and his friend Hiten Patel (Vishal Malhotra) still can’t land a project. Every time they try to land a project something goes wrong.Raj happens to run into an ad of a fortune teller Haseena Banu Jaan (Juhi Chawla). He meets her and is told that its all because of bad luck and that that his luck is going to change with the arrival of someone.

Surely enough, he runs into Priya (Vidya Balan) and his luck changes. Whenever she is around things start to fall in place and he soon realizes this. But there’s a catch. Priya happens to be an activist working against the very mall whose construction contract he needs to win. Speak of irony. He uses her to get the contract lying to her that the community center that she is passionate about will still be there.

They both fall in love. Will Raj give up his great opportunity for Priya? Will she find out? Will the community center still stand? This is what Kismet Konnection is about.

Inspired from the movies Just My Luck and Lage Raho Munnabhai, the movie is average at best. In the first few scenes Shahid tries to copy Amitabh and Shah Rukh a lot. He looks much better when he is not aping these actors. Vishal Malhotra is adequate. Vidya Balan looks out of place with her dresses and her hair cut (who did her hair cut?). She looks much older opposite Shahid and her role is a similar to her Lage Raho role. There are a few scenes when there appears to some kind of chemistry between them but those scenes are few and far in between.

As far as the setting is concerned, the movie should have been set in Mumbai or some other metropolitan city in India. There is no reason why the movie had to be shot in Canada. All the people in the community center are Indians and they are protesting in Hindi. The movie drags a lot. It continues in the tradition of all Aziz Mirza movies, average at best. It is also kind of preachy just like his Raju Ban Gaya Gentleman.

So if you have nothing better to do, then you can surely watch it.