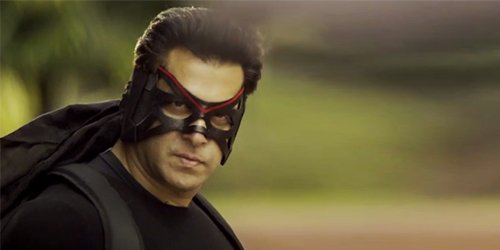 If you look really closely, you’ll notice that the new Salman Khan starrer Kick is fashioned as a mirror to his own life. Directed by Sajid Nadiadwala, this is a movie on a mission. A mission to whitewash the actor’s controversial personal image, and to reinforce the notion that he’s a bad boy with a heart of gold.

In the film he plays enfant terrible Devi, who’s a raging alcoholic, who gets into fights at the drop of a hat, and who’s been to prison more than once – all because it gives him a kick. But, as an understandably baffled character repeats to himself, trying to wrap his head around the idea, “woh dil ka bahut achcha hai”.

As many as three writers are credited with cobbling together this unconvincing script about Devi’s transformation into a Robin Hood-like thief who steals from corrupt fat cats so he can pay for the cure of every ailing child in the country. A metaphor, perhaps, for Salman’s reputation for pouring his earnings from his frankly lousy movies into his charity Being Human? You decide.

But back to the film, Kick is plagued with pacing issues, underwhelming action scenes, and an indulgent screenplay that gets to the heart of the plot roughly an hour into the movie. That’s an awful lot of time to waste on a charmless romantic track between Salman and Jacqueline Fernandez, who plays – you’ll never believe – an honest-to-goodness psychiatrist, affectionately nicknamed Pyscho by her lover.

She’s Shaina, now settled in Poland, and she narrates her short-lived love story with Devi to her new suitor, a cop, Himanshu (Randeep Hooda), who’s having as much trouble with another man, the masked thief Devil, who he badly needs to catch. For a pair of supposedly smart professionals – a shrink and a super-cop, no less – Shaina and Himanshu are the only two people who haven’t figured out that Devi and Devil are the same person.

As it turns out, the best thing about Kick is Nawazuddin Siddiqui, who shows up in the second half as Shiv Gajra, the film’s chief bad guy with a creepy laugh. In one scene, after choking a man to death using bubble-wrap paper, he casually pops the bubbles on the same sheet, still wrapped around the dead man’s face, as if it were the most natural thing to do.

If, like Nawazuddin, this film didn’t take itself so seriously, it might not have felt like such a slog. But we get a manipulative flashback about dying children, apathetic businessmen, and a brawny hero who is repeatedly moved to tears. It all feels very contrived and doesn’t make much sense either. A set of able-bodied parents jump off the roof of a building when they can’t pay for their ailing daughter’s treatment. Fat help they are to her dead!

But the pursuit of logic in a Salman Khan film is a rather fruitless exercise, even his die-hard fans will agree. The actor admits as much in a telling dialogue at the end of the film: “Mere baare mein itna mat sochna. Dil mein aata hoon, samajh mein nahin.”

To be fair, despite its problems, Kick is an improvement on most films the actor has starred in recently. It’s neither as tacky as Jai Ho, nor as plain lazy as Ready and Bodyguard. There are some moments of inspired humor, like a clever role-reversal in a meet-the-parents situation between Devi and Shaina’s father (Saurabh Shukla). It’s slickly shot (by Ayananka Bose) and the soundtrack (by Himesh Reshammiya) has a few hummable hits. But it’s also the most fun you’ve seen Salman having on screen lately.

The actor, fully aware of his strengths and of what his fans expect from him, is in goofball mode. He dials up the charm, and delivers flashes of amazing spontaneity, making you wish someone wrote a better film for him. Kick will no doubt break box-office records and earn many many crores for its makers and for its leading man, but it’s a shame he will settle for just this.

I’m going with a generous two-and-a-half out of five for Sajid Nadiadwala’s Kick. I didn’t hate it. If that’s enough encouragement, sure, go watch it. But you were going to anyway, right?