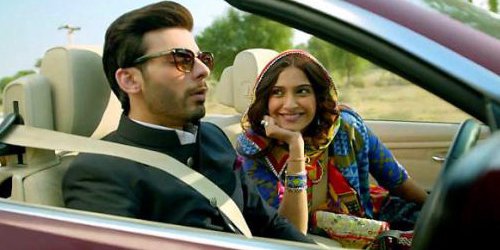 The Disney logo at the start of Khoobsurat is a telling sign of what to expect from the film. This isn’t so much a remake of the Hrishikesh Mukherjee-directed comedy starring Rekha, as it is a squeaky-clean chick-flick from the Mouse House. Sure the premise – of a free-spirited girl who loosens up a stuffy family that’s headed by a strict matriarch – is reminiscent of that 1980 gem, but director Shashanka Ghosh and his writers literally root their story in a Rajasthan palace, turning it into a charming Princess Diaries -like fairytale.

Sonam Kapoor is Mili, a middle-class physiotherapist whose expensive wardrobe suggests she’s clearly good at what she does. When she shows up to work with a blueblood (Aamir Raza Hussain) who’s lost the use of his legs, we learn that she’s a klutz too. The lady of the house, Nirmala Devi (Ratna Pathak Shah), has little patience for Mili’s blatant disregard for rules, but her son, Prince Vikram (Fawad Khan), finds himself slowly drawn to this ball of manic energy.

Inoffensive and entirely predictable, the film follows a familiar narrative that rarely springs any surprises on you. There’s a stubborn patient to convert, palace staff to win over, and a confused teenage girl to inspire…nothing Mili can’t achieve without resorting to a tantrum or breaking into a dance routine. Yawn. Still it’s a breezy watch, not least because the film focuses primarily on the love story, and because the leads have palpable romantic chemistry. Fawad, who plays the humorless, straitlaced royal is the perfect foil to Sonam’s hyperactive rebel. Their scenes together crackle with sexual tension (yes, in a Disney film!) and Mili even gets to make a joke about it.

Shashanka, who revealed a knack for delicious left-of-field humor in his previous directorial outings (Waisa Bhi Hota Hai Part II and Quick Gun Murugun) flexes those comic chops in scenes involving Mili’s overbearing motor-mouth mother (a terrific Kirron Kher). There are laughs to be had also in the exchanges between Mili and Vikram, whose real thoughts are conveyed to us through the voiceovers in their heads.

Much of this works because the cast appears to be having a good time on screen, and to be honest that enthusiasm is infectious. Sonam Kapoor, doing some of her better work here, is nicely goofy and consistently endearing as the unpredictable Mili who seldom filters her thoughts before speaking. Fawad Khan is a perfect fit as the charming Prince, silent mostly, repeatedly rolling his eyes, arching his brow, struggling to wrap his head around this ticking time-bomb of a girl. A word here also for the excellent Ratna Pathak Shah, whose tightly wound Nirmala Devi isn’t so much a tyrannical disciplinarian like her mother Dina Pathak was, playing the same part in the original film.

There are problems too, particularly a handful of script contrivances that jar. A break-up between a couple that’s engaged to be married feels strangely sterile, and the protagonist’s way of dealing with heartbreak towards the end of the film feels ‘different’ for the sake of it. But these are minor quibbles in a film that is inherently sweet. Khoobsurat, then, is a good example of how formula, when done skillfully, doesn’t have to be a bad thing.

I’m going with three out of five. It may not be for everyone, but for those who seek comfort in the familiar, it’s a pretty satisfying watch.