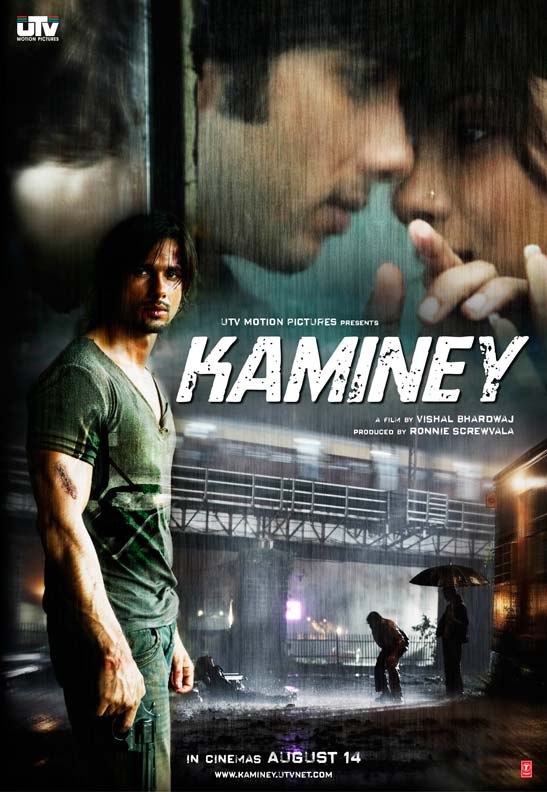 Charlie and Guddu (Shahid Kapoor) are identical twins who can’t stand each other. Charlie lisps while Guddu stammers. Charlie, who hedges bets on horses, gets involved in a drug tangle and the corrupt cops and the goons are after him. Guddu, a safe sex NGO worker, ironically knocks up his girlfriend Sweety (Priyanka Chopra) and her brother Sunil Bhope (Amole Gupte), a gangster with political ambitions, is after him. The brothers get sucked into a world of drugs, guns and money and the rest of the movie is about whether they can get out of this mess.

Some of the scenes stand out like the one where Charlie finds out why the cop saluted him or the scene of Sweety’s outburst when Guddu refuses to marry, the play fight between Bhope and Mikhail (Chandan Roy Sanyal), the scene where Guddu tells his childhood love story, the scenes involving the little kid and the interrogation scenes. The hotel chase scene is the best scene of the movie and should rank as one of the best shot scenes in Hindi cinema.

It’s good to see Vishal credit Cajetan Boy for the story idea in the title credits and he even has an African character named Cajetan. Screenplay is good for the most part but the backup story for the hatred between the brothers looks very tame. The movie seems cluttered with so many different gangs and could have done away with at least the African characters. The fight scene between Charlie and Guddu seems to be done the old school way with only one face visible at one time. It could have used some nice visual effects but the movie probably suffered from a restrictive budget that Vishal had pointed out in an interview.

Cinematography by Tassaduq Hussain is excellent and the hotel chase scene is exemplary. Background music, Songs and Dialogues by Vishal Bharadwaj are excellent. Gulzar disappoints a bit with the lyrics. They range from some excellent lines to some mundane stuff like “Pahli Baar Mohabbat Ki Hai, Aakhri Baar Mohabbat Ki Hai” which one doesn’t expect from a great lyricist like him. The song Dhan-Te-Dhan has the singer’s voices swapping between Charlie and Mikail. Charlie who says “f” for “s” has no problem singing ‘Paisa Paisa Ka Khel’ during the song. Vishal should have taken care of it in the song too as he does sing ‘Fpiderman Fpiderman’ at one point in the movie. The movie shows that Guddu does not stammer when he sings and this at least explains his singing the ‘Fatak’ song properly.

Shahid Kapoor is brilliant as the aggressive Charlie and very good as the docile Guddu. He even modulates his voice very well as Charlie. This is his career best performance and should win him all the Best Actor awards. Priyanka Chopra is excellent as the feisty Sweety and will probably win all the Best Actress awards. Amole Gupta steals the show as the dangerous and unpredictable Bhope. Chandan Roy Sanyal, Shiv Subrahmanyam and Tenzima Nima are all excellent and the rest of the cast is decent.

Vishal Bharadwaj’s direction is excellent for the most part but the movie does bore a bit at times and the climax is overdrawn. Vishal Bharadwaj seems to have been very much influenced by Guy Ritchie and Quentin Tarantino movies with all the different gangs, confusion and the final free for all. The movie is dark and a bit lengthy for a caper and may not be every one’s cup of tea. Despite some flaws the movie still merits a watch for its honest effort to make a new kind of Hindi cinema.