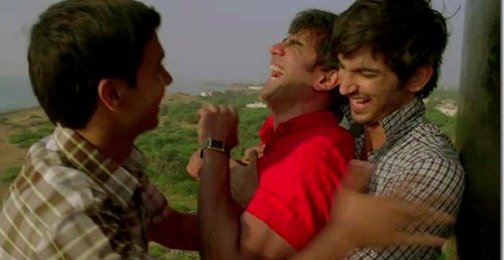 Its title derived from that cry of victory yelled out when an opponent has been defeated in a kite flying challenge, Kai Po Che translates literally as “Gotcha!” An apt expression, perhaps, to describe the home run director Abhishek Kapoor delivers through this moving film about a friendship challenged by real-life tragedies.

Rooting a simple story in a realistic middle-class world far removed from the glossy surfaces of Rock On!, Kapoor can’t shake off his fascination for buddy pictures, but in Kai Po Che we’re treated to a more honest, assured portrait of friendship that never feels as conventional as his National Award-winning previous film.

Based on a novel by Chetan Bhagat, the film, set in the year 2000, focuses on three childhood pals who pool in their skills and resources to set up a sports shop-cum-cricket academy in their Ahmedabad neighborhood. A brilliant sportsman in his school days, hot-headed slacker Ishaan (Sushant Singh Rajput) commits himself to coaching young hopefuls. Omi (Amit Sadh) taps his local politician uncle for a loan to set up the enterprise, while business-minded Govind (Rajkumar Yadav) takes on the responsibility of maintaining accounts. But just as things are looking up for our earnest protagonists, a series of unforeseeable events threatens to destroy their business and their years-old friendship.

Weighed down by a loan he can’t repay, Omi is forced into taking on an active role in his uncle’s fundamentalist Hindu party. Govind, meanwhile, becomes romantically involved with Ishaan’s feisty sister (Amrita Puri), whom he’s been tutoring in math. And Ishaan becomes obsessed with grooming a young Muslim kid with immense batting potential. The earthquake of January 2001 that ripped through the city and claimed thousands of lives not only quashes Govind’s dreams of business expansion, but also drives a rift between Ishaan and Omi, who find themselves on the opposite sides of a communal divide.

Skillfully shifting gears from the light-hearted camaraderie of our heroes in the opening act, to the emotional abyss they’re thrust into in the film’s final half hour, Kapoor maintains an unhurried pace and an even tone. Despite the excessive cricket jargon likely to throw off non-sports enthusiasts, you’re drawn into the trio’s world, engaged by their simple joys, concerned for their dilemmas. How do you resist a smile as they plunge into the sea from the top of a fort? Or as each makes his way to the roof of a bus as they head out to celebrate their first earnings?

Kai Po Che is filled with such lovely moments, but the story doesn’t linger on this bonhomie. The earthquake, a thrilling India-Australia test-series, followed by the devastating Godhra massacre and the riots of 2002 colors our protagonists’ friendship. Brick by brick, the screenplay builds up the tempo, until the climax delivers its sucker punch. You’d have to have a heart of stone not to be moved by the film’s piercing finale.

Much of the film’s success lies in its spot-on casting, even of solid actors in supporting roles, like Manav Kaul playing Omi’s manipulative Bittu mama. Meanwhile, all three leads sink their teeth into nicely etched roles. The abundantly gifted Rajkumar Yadav brings an awkward charm to Govind, turning this penny-pinching, tight-fisted fellow into a living, breathing everyman. Amit Sadh oozes vulnerability in every scene that Omi appears in, and convincingly conveys the character’s inner conflict. But it’s Sushant Singh Rajput, making his film debut as Ishaan, who it’s hard to take your eyes off. The actor has an indescribable presence, and it’s clear from his confidence and distinct likeability that a star is born.

At a crisp two hours, Kai Po Che is enriched by its sweeping score and by Kapoor’s deft handling of the film’s varied moods. For evidence of his considerable growth as a director one needn’t look much further than the palpable dread he infuses into scenes of an angry Hindutva mob storming a Muslim ghetto, and the light-handed touch he brings to the portions of the three friends goofing around. Kapoor tackles sensitive issues like the Gujarat riots with equanimity and empathy, and Anay Goswamy’s terrific camerawork complements the director’s vision intuitively.