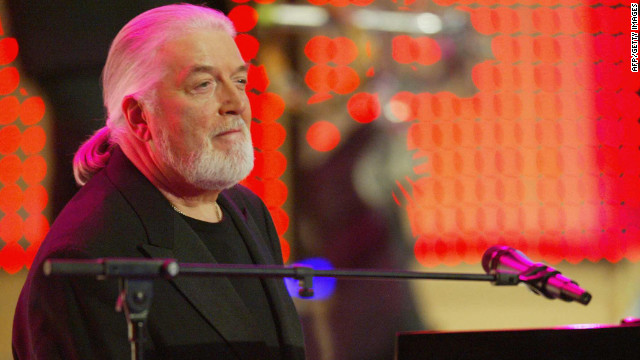 Keyboard player Jon Lord, who fused classical and heavy metal to make Deep Purple one of the biggest rock bands in the world, died Monday after a long battle with pancreatic cancer. He was 71.

Lord suffered a fatal pulmonary embolism, or a blockage of the lung artery, according to a statement posted on his website.

Born in Leicester, England, on June 9, 1941, Lord took classical music lessons as a child, and as a teen became enamored with the sound of the blues organ.

Later, he was among the first musicians to successfully and seamlessly blend the two influences using a Hammond C3 organ, distorting the sound, and routing it through amplifiers.

While best known for co-writing the Deep Purple hit, “Smoke on the Water,” Lord never strayed far from his classical roots. The band’s “Concerto for Group and Orchestra” in 1969 was one of its first chart successes.

Combining his dazzling virtuosity on the keyboard with the equally virtuosic Ritchie Blackmore on the guitar, the band left behind a string of rock classics that showcased their musicianship: “Space Truckin,” “Highway Star,” “Child in Time.”

At its heyday in the 1970s, Deep Purple was as big as the Rolling Stones, Led Zeppelin and Black Sabbath, selling more than 100 million albums.

“We’re as valid as anything by Beethoven,” Lord said in an interview with NME magazine in 1973.

He retired from the band in 2002, and spent the following years working on solo material and collaborating with others, including work last year on a single by the supergroup WhoCares, featuring Purple singer Ian Gillan, Sabbath guitarist Tony Iommi, Iron Maiden drummer Nicko McBrain and former Metallica bassist Jason Newsted.

Last August, Lord posted a message to fans where he revealed he was fighting cancer and would be taking a break from performing.

“I shall of course be continuing to write music — in my world it just has to be part of the therapy — and I fully expect to be back in good shape next year,” it said.

He canceled a July 6 show in Germany where he was scheduled to perform with the Hagen Philharmonic Orchestra, with his website attributing it to “a continuation of his regular treatment.”

He died Monday at The London Clinic, surrounded by family members, the site said.