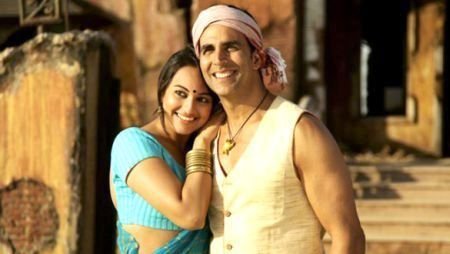 In Joker, directed by Shirish Kunder, Akshay Kumar is cast as a committed NASA scientist. You can laugh now. Very likely it’s the only time you’ll laugh during this disappointing film.

Stripped down to its basics, there’s an interesting premise at the heart of Joker, but Kunder fails spectacularly in exploiting its potential. In a sequence parodying Swades, US-based Agastya (Kumar) returns home to Paglapur, an obscure village in North India that doesn’t even have access to basic amenities like water and electricity. Gathering the village’s crackpot residents, Agastya hatches a plan involving fake crop circles and aliens in a bid to get the world to take notice of his hometown. Even as the media and politicians descend upon Paglapur for a piece of the action, a rival American scientist shows up to expose Agastya’s hoax.

Despite its crisp 100-minute running time, Joker feels long and laborious because most of the gags are recycled. The humor is flat, and the characters plain silly. Like Ajay Devgan in Bol Bachchan recently, Asrani plays a professor who translates Hindi literally into English. Shreyas Talpade is a madcap who speaks in an odd tongue that nobody understands. We spot a kid suspended upside down from a ceiling; “He thinks he’s a lantern,” we’re informed.

It’s easy to write off Joker as a complete failure, but to give credit where it’s due, the film is less offensive than many Akshay Kumar films we’ve seen recently. Devoid of double-meaning dialogues and sexist jokes, there is stuff here that might have made for an engaging children’s film, had Kunder not fallen prey to that oldest mistake – of treating his audience like fools.

Akshay Kumar goes through his scenes earnestly; Kunder deserves praise for reining in his star, and not subjecting us to the kind of loud performances we’ve seen from Akshay in most comedies. Sonakshi Sinha, meanwhile, playing his supportive girlfriend who travels with him to Paglapur and is a willing participant in his alien-drama, has little to do but look pretty.

Joker unfolds briskly and predictably. Alas, just as you’re confronted with an unpredictable twist in the tale, the film comes to a screeching halt. Once again, an opportunity wasted.

I’m going with one-and-a-half out of five for Joker. This is no enjoyable circus. Far from it.