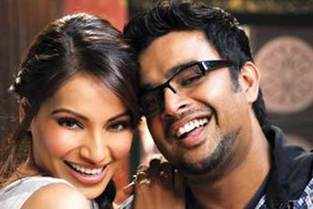 Story: Sid and Sonali are jodi breakers, experts in getting squabbling couples to divorce. But can they form a jodi of their own?

Movie Review: In times when love is a multi-million industry, even the business of separation can be profitable employment. Lots of divorce lawyers would say that. But Sid is a divorce expert with a difference. He seduces the unfaithful and passes on the evidence. Even pehelwans from Haryana take his help to rid themselves of desperate wives. All this means a fab pay cheque in return. And his professional life only gets better when he hooks up with Sonali ( Bipasha Basu). Together they become top jodi breakers.

But Sid’s own life is a mess. He is tired of paying alimony to his much-separated wife. And when she offers him a deal — drive a wedge between a happy couple (Milind Soman and Dipannita Sharma) and he can get whatever he wants — Sid falls for it. And that lands him in a bigger mess.

At first glance, Jodi Breakers has a lot going for it: an unusual and interesting lead pair, fabulous outdoor location (Greece, in this case) and foot-stomping music. But the movie is let down by a script that lacks fizz and connect. Director Ashwini Chaudhary’s venture begins as a comedy but gradually morphs into romance and loses momentum in the second half. Not even Helen can perk things up. Romance as remorse doesn’t work here.

A couple of one-liners do work — Omi Vaidya is called Nano because he is small, sweet and affordable — but overall, the gags are sub-par. Vaidya gets to repeat his hilarious ‘misreading’ of a text as in Three Idiots with slight variations. But it is not half as funny. Elsewhere, Madhavan bursts into an operation theatre where a patient is about to undergo a heart operation and gets chatting with the doctors. It is meant to be zany but the scene ends up being asinine.

Jodi Breakers isn’t entirely without merit though. Madhavan is earnest. And Bipasha looks stunning, especially in the scenes shot in Greece. The romantic scenes between the two have a coy intensity. Together they try to make the film better than it actually is. And the track named Bipasha has spunk and rhythm though Kunwara is likely to be the chartbuster. But it simply isn’t enough.