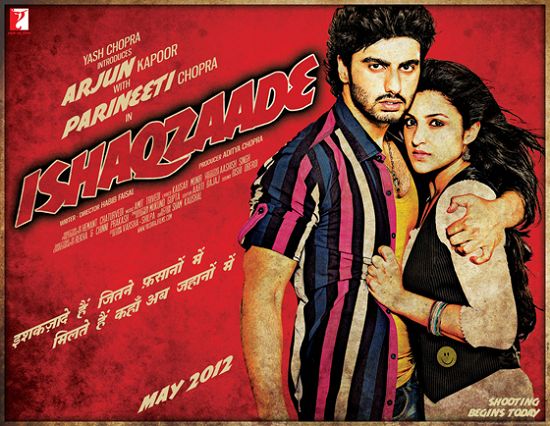 Habib Faisal’s directorial debut DO DOONI CHAAR, starring Rishi Kapoor and Neetu Kapoor, depicted the aspirations of a middle-class family. It won immense critical acclaim, appreciation of the viewers and the Best Hindi Film National Award. Now his second film ISHAQZAADE has generated tremendous buzz thanks to its raw and edgy trailers, likable music and also for its setting — the Hindi belt where guns still reign supreme. And you aren’t disappointed either, for the film meets the lofty expectations, assuring you that the 2+ hours were well worth it!

Yash Raj Films returns to the era of action after a hiatus, but they have not done away with their core USP, romance, as ISHAQZAADE is a passionate love story, which is the emphasizing theme of the film. In fact, ISHAQZAADE is not only about aggression and romance, you also get a glimpse of the arrogance and conceit of people in small towns in India.

The story unfurls in the idealistic and intimidating scenario of North India. ISHAQZAADE depicts the love story of two defiant, rebellious individuals. A passionate love story ignited by extreme dislike. It revolves around two disputing political families, two fiery individuals and their battle for control and superiority. The two characters, Parma [Arjun Kapoor] and Zoya [Parineeti Chopra], who have been told since early days to detest each other, are almost equipped to eradicate each other and then something happens in their life post which they realize they are actually quite alike. They start wondering when we both are so similar in our personality and stance, why have we got this extreme dislike for each other?

In such a setting, when two people, who have been loathing each other all this while, fall in love, things go askew.

The chemistry between Arjun Kapoor and Parineeti Chopra on screen certainly follows the model of the chemistry that was created in DILWALE DULHANIA LE JAYENGE, BUNTY AUR BABLI and BAND BAAJA BAARAAT. It’s infectious and that, in my opinion, is the hallmark of the film, besides the script of course. In the initial portions, both Arjun and Parineeti are at loggerheads, bartering cusswords, flaunting guns and trying to be one-up on the other. Their love story towards the middle of the first part is equally electrifying and the portrayal by Arjun and Parineeti gives the film the required sheen.

The post-interval portions have several euphoric moments. The heated conversation involving Arjun’s mother and the aftermath is brilliantly penned and executed. Ditto for the sequence when Arjun apologises to Parineeti in this hour. It’s truly emotional! The only hitch is that the film slows down before it reaches the finale thanks to some unwanted sequences [the sequence in the laboratory] and some songs in this hour. The culmination to the film is a highpoint and mirrors a reality as well.

Habib Faisal belongs to a fresh class of writers and film-makers who does away with the beaten to death drama that one gets to watch in films of this genre. Filmed at actual locations of Uttar Pradesh, the story of ISHAQZAADE has universal appeal and could have been set in any of the big cities, but the small town milieu lends the plot a kind of passion missing in large metros. Perhaps, the magnetism towards love is that much stronger in a small town, also the conflict of the people opposing love is manifold stronger likewise.

Amit Trivedi, one of the most gifted and skilled musical talents, comes up with a harmonious and pleasant-sounding album. ‘Ishaqzaade’, ‘Pareshan’, ‘Aafton Ke Parinde and ‘Chokra Jawan’ — each of those tracks are popular already. The best part is, the songs of ISHAQZAADE have not been filmed on romantic landscapes, but at humdrum locations, which makes it so real and very much in sync with the mood of the film. I’d like to make a special mention of the cinematography [Hemant Chaturvedi], which captures the essence of North India and the rustic flavor so well. The background score [Ranjit Barot] adds a lot of pep, while the action and chase sequences [Sham Kaushal] are wonderful.

Arjun Kapoor makes a fantastic debut. He has a peerless body language and a ‘I-don’t-give-a-damn’ kind of an approach in the movie. The youngster, with his untidy look and impish smile, has already won female reverence prior to the release of the film and after having watched him emote, you can confidently say that he’s blessed to depict this rebellious character in his launch vehicle itself. He comes across as fiery and rustic and at the same time self-assured and assertive in this reckless and intrepid character.

To acquire a film of this scale and magnitude is a triumph by itself for a beginner, for a script and character like this happen once in a while. Parineeti Chopra is simply fantastic in this high-voltage drama. Playing the part of a spirited gun-toting girl, she is not the regular timid, decorous, withdrawn Hindi film heroine. She portrays the violent behavior coupled with the audacious and brash attitude with aplomb.

On the whole, ISHAQZAADE, a volatile and intense story with ample doses of fanatical romance, should appeal to a pan-India audience. This broadly engaging love story has a winsome pair who deliver dexterous performances, besides popular music and several poignant moments, which should appeal to fans of mainstream films. Go for it!