“In Agent Vinod we tried to make every sequence, every scene as juicy as possible.” – Sriram Raghavan 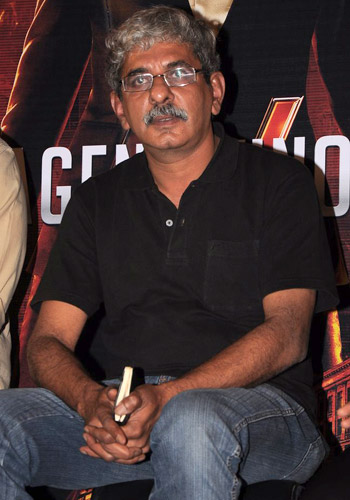 How did this project come about?

Actually about 4-5 years back I had gone to meet Saif regarding some other story, which I wanted to narrate to him. It was a love story and he told me I am doing so many love stories anyway, so why don’t you do a thriller kind of thing. Earlier we had done a thriller, which got appreciation. A lot of people had liked it but it didn’t do very well. We got talking about the movies we liked as kids and we spoke about James Bond. He is an encyclopedia of James Bond actually. There was this old Hindi movie called Agent Vinod (1977), which was a Euro-spy kind of film, which we both had funny and fond memories of. So then we said that let’s do a spy film and let’s call it Agent Vinod because the title is cool in a retro way today. I said let me do my own story, not remake that story, but make another story and film with the same title. That was four and half years ago we were discussing this. Then Saif and his partner got together and they decided to form a company. So then I got a call saying we are ready to make that spy film. So that was the process to the film.

How do you go into the process of sitting down to write and saying okay…. a spy thriller?

That was like actually six months of sheer fun, in the sense I was just watching all the spy movies, some which I’ve already seen or movies which I discovered. From World War 2 movies like Where Eagles Dare to James Bond, of course. Then there are odd movies like The Quiller Memorandum and The Spy Who Came in From the Cold, a whole lot of movies. So I just sat and watched them and read a lot of novels. I was trying to basically just get our act together and then of, course, at some point I said okay, let me just make a simple story and try and sell it in an interesting complex manner. 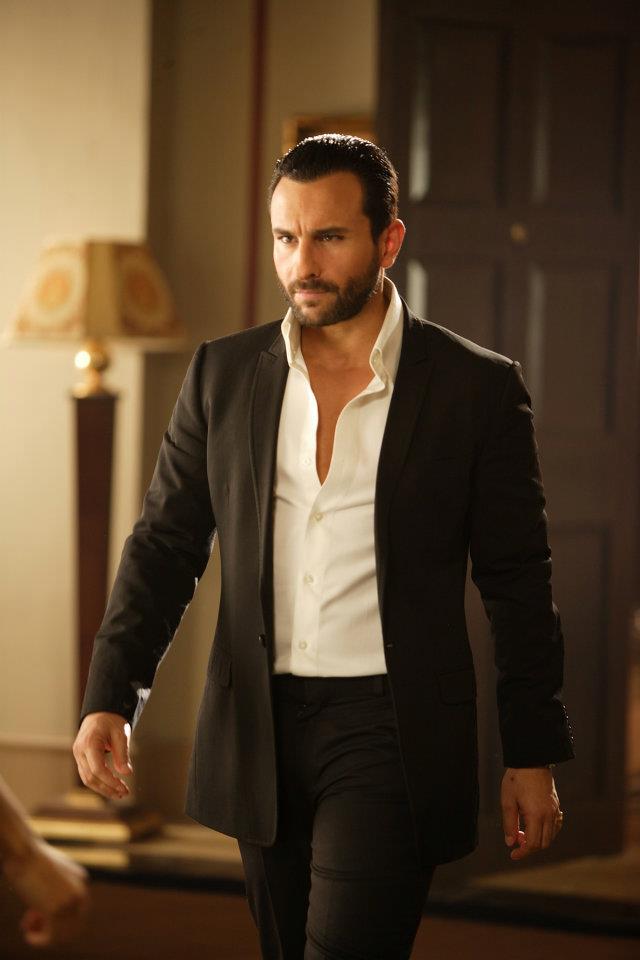 Though a lot has been said about it being an action film, but when I watched that first trailer and the scenes we have seen glimpses of in the songs I thought there is much more to this story, a deeper story and twists and turns…

Yes, I hope so. The paradigm of the story is very simple. An Indian Agent gets killed abroad in Russia because he was exposed, and before dying he managed to pass on a very cryptic message to his headquarters and it’s just a number 242. When Vinod comes in he’s sent on the case and it is his journey to find out what does this number mean and what is it all about. He’s sent to Russia, from Russia he gets sent to Morocco, and there he meets this girl, who is a very kind of slightly enigmatic girl. Her name is Iram, played by Kareena Kapoor, and you don’t know whether he should trust her or not. He meets a whole lot of colorful baddies along the way. It is like a journey, a treasure hunt, a quest kind of a film, you know. So it’s a fairly simple storyline but as Sergio Leone, one of my favorite directors said ‘it’s not so much the story it’s how you sell it’. So that was the idea. We tried to make every sequence, every scene as juicy as possible.

There have been so many comparisons, but how would you describe the film and Saif’s character?

The film is kind of a contemporary spy thriller with a realistic story. A realistic scenario set in today’s time with a dash of flamboyance and humor because the title Agent Vinod promises that. It promises excitement and adventure. But at the same time there is a basic code to have a certain reality to it that it’s something that could actually happen. God forbid if it happens, but it is something that could actually happen and that is the kind of story it is. It goes all over the world, but it finally comes to India. The climax is set in New Delhi. At the end of it you think the film is over but there is a kind of a little, I won’t say a big twist, but kind of something more to unravel. That’s the kind of story it is.

The character of Vinod – in the film we were very sure we wanted to make a Bond kind of a movie. Even with Bond there’s Daniel Craig, who is a very serious Bond and before that with Sean Connery again there was a certain level of seriousness. Then once Roger Moore came in the early Bond films there was a slight shift to the tone of the film. Then the Pierce Brosnan films, there’s a lot of gadgetry and a lot of almost fantastic stuff happening in the Bond films. Of course, all that was fun while you watch it but then that all changed and later on they almost rerouted the character. Of course, Bond is an iconic character so obviously we can’t be not influenced by the Bond, but at the same time we wanted to make a very Indian hero. Somebody who our Indian audiences could relate to. So he’s that way, a kind of guy who doesn’t rely too much on gadgetry and he doesn’t have laser beam watches and invisible incredible cars and stuff like that. He’s a guy who relies on his own cunning, intellect and skill. 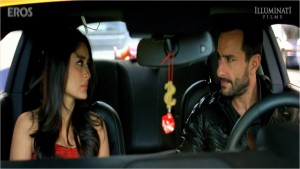 Tell us about working with Saif the actor.

I think I am the wrong person to say, but I think he looks terrific and has done fantastic job in this movie. It won’t make sense for me to say it, that’s for the audience to see and judge. I think it’s a role that right from the start it is one role he probably wanted to play and is maybe why he became an actor. All boys like spies. You know a guy is alone and in foreign lands and he meets a glamorous femme fatale kind of character. This film is kind of a boyhood fantasy. And because he’s so much into these kinds of characters and role, he just went for it and did all that we wanted him to do. He is a really good actor and this is a role, which he enjoyed. This is a meaty role that he just sunk his teeth into!

This is the first time I am working with her. She’s a lovely actress. She is a very spontaneous actress. She’s got a very layered role in this movie. So often I used to wonder okay she has to say this, but she has to be thinking that, she has to behave like that and so on. She is role-playing within the movie. So I used to wonder how do I explain this sequence to her in an articulate manner, but somehow she just got it right each time.

You know we got an interesting pairing with Saif and Kareena because they are a real life couple, but I think in the film you’ll forget about the real life couple and watch them as the characters that they play.

So, actions scenes with Kareena, since she has never really done them…

I think in her top ten films there is not a single action film. They were more romance, drama and so on. Whereas Saif’s top ten would be only action films. (Laughs) So in that sense she used to keep telling us ‘oh I don’t like action’. But in our film the action is very realistic. It’s not like Mr. & Mrs. Smith, for sure. As an actress, even though action is not her cup of tea, she really gave it her best shot and she did a good job. There were a lot of scenes where it’s not action in the sense of gunplay and stuff like that, it’s more of an attack by somebody and you defend yourself; it is more that type of action. 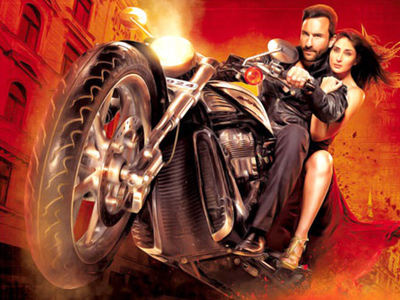 You talked about us forgetting they are real couple, so the two on screen together, how did they feed off each other as actors?

While we were writing we were very conscious of this. There were a couple of people who were also worried that the earlier films that they had done together had not done too well or whatever. But I said that a film doesn’t work for many reasons or it works for many reasons. At the end, my co-writer and I, we were quite sure that we had to play the characters in a way that the people don’t expect a typical kind of a relationship, a love story kind of a situation in the movie. There is a relationship of course, but we have done it in an unexpected way.

You have shot all over the world, so how did you decide where the situations would take place?

Actually what happened is when I was writing and I knew it being an agent film there would be certain amount of traveling and going to different countries. So initially I actually use to make a wish list of places I wanted to go. (Laughs) Oh I’d love to go Morocco and shoot something there and then okay what about this place, what about that place. Then we used to Google and check out many places and do a lot of armchair traveling this way. We finally chose three or four countries but I didn’t want to sell it as you know we’ve gone to so many countries, that’s not the point, the point is that the palette of the film changes. For example, it starts in Afghanistan, which is kind of a dusty desert landscape and then it goes to Russia, which is cold, followed by Morocco, it was in the height of summer we shot there. Riga, Latvia which is again East European, it is a colder, darker kind of area.

What is your favorite thing about the film?

At this stage there’ll be too many things. But I think it’s got a lot of music in it, which in my earlier films I really didn’t have. So for me the challenge was to make the songs set into the script and the situation. I am against kind of interrupting the story flow. So that was one thing. Then I think opening sequence. We wanted to introduce our character in an as interesting a way possible. So it’s a very unexpected kind of introduction where you kind of worry okay is this the agent and what’s this guy all about… you know that kind of thing. And eventually you get an idea about what he’s doing and why he’s doing it.

What do you think audiences are going to love about Agent Vinod?

It’s a roller coaster ride. It’s like a Hitchcock film like North by Northwest. It’s got a little bit of the Bond flavor and at the same time it’s got the grip and edge of a Bourne film. It’s finally a Hindi movie with all its music and humor and all that. I think it’s an overall package that is sumptuous.

I would like to thank Sriram for the great talk and look forward to seeing Agent Vinod when it hits the big screen tomorrow!