I have become a nun: Mallika Sherawat 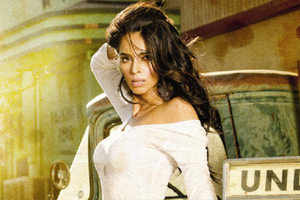 ‘When I tell her, “Welcome back!” she says, “But I never left!” Mallika Sherawat is in India shooting two films – Sudhir Mishra’s Lucky Unlucky and Amit Chandrra’s Kismat Love Paisa Dilli with Vivek Oberoi – but says she feels most at home in Los Angeles. “There are lots of suitors, you make the right friendships and they don’t judge you there. People don’t perceive you with preconceived notions. In India, I feel trapped in my image. People think you are the same way you are on screen. Thankfully, the films I’m doing now will break that myth.”

How did you break into Hollywood? Honestly, it was tougher in Bollywood! There’s no nepotism in Hollywood, so I found it much easier. They welcomed me and showed me so much love. For me, it was always about being independent, because here women don’t get too many opportunities. When I met President Barack Obama some time ago, he said, “America salutes the spirit of independence, that’s what America is built on, and now you have done it and we are proud of you.” Those words will be with me till my dying day. I really had nothing to lose by going there. I don’t doubt myself. Even when I ran away from home and came to Mumbai, who would have thought I’d be there someday? You got to have passion and faith. You live only once!’

‘Are you worried about getting typecast as the stereotypical Indian girl there? Not anymore. I did feel that in the past, because there was a time when Spanish-speaking people were cast as maids, African Americans were portrayed as gangsters, and all terrorists were Middle Eastern people. But now I think they are writing good parts for ethnic people. I think with Slumdog Millionaire and Freida Pinto doing so well, things are changing. Experimenting with different genres is really exciting. I think young directors are braver than actors there and here. They have the courage to cast me in these characters.

How do you react to those who believe your career is over? n My obituary has been written SO many times that it really doesn’t bother me now. I think women are still treated in a regressive fashion, so for me, where I started and where I am today has been a fun rollercoaster ride.

Is there any bad blood with the Bhatts? I have no issues with them. If I get a good script from them I will do it. They gave me one of my biggest hits Murder and I loved working with them. Mahesh Bhatt keeps texting me. In fact, when I met Obama, he was the only person from the industry who called me and said, “Aaj toh yahan maatam chaya hoga!”

Emraan was recently quoted saying kissing Mallika wasn’t really fun. Your reaction? That’s his opinion. I had more fun kissing the snake in Hisss. For me, the snake was the best kisser… my best lover ever!

Are you dating anyone? I have become a nun! If there was someone I was seeing or interested in, then I would definitely talk about it. There are some interesting men who’ve asked me out, but everytime I think of concentrating on love, some project comes along. It’s true but I’m busy making a career. You have to give your 100 per cent here; either you do this or you have a love life. Right now, more than a man it’s the scripts that are exciting me.’