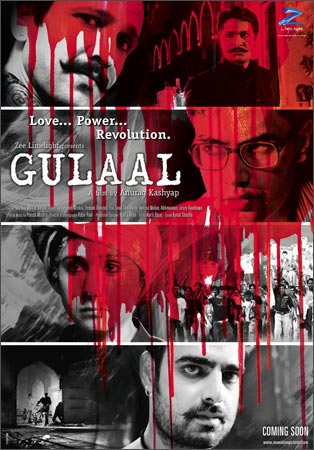 Gulaal is a demented movie about the demented made by a demented director. It should have had the tagline “Of the demented by the demented for the demented”. Gulaal is set in a fictional town in Rajasthan. Duki Bana (Kay Kay Menon), a member of the royal family, is the leader of a secessionist movement to create a new Rajputana. Duki has Dileep (Raja Chaudhry), a law student, stand in the elections when Dileep’s roommate Ransa (Abhimanyu Singh) gets killed. Kiran, the illegitimate sister of Ransa, who gets defeated by Dileep befriends him and he falls in love with her. The rest of the movie is the political intrique behind all this.

The movie could have atleast been a Haasil (which kind of lost it towards the end) but this one is horrible. Its filled with stupid scenes of some guy dressed up as a half man – half woman who keeps popping up for no reason. It has this Bana character (Piyush Mishra) saying some stupid dialogues and singing stupid poetry. Jesse Randhawa’s character could have been eliminated from the movie and it would not make any difference to the movie. ‘Ranaji’ is the only good song in the movie and its lyrics are atleast funny.

Kay Kay Menon is brilliant as Dukey Bana. Raja Chaudhry is ok. Abhimanyu Singh is excellent but gets bumped off very early. Deepak Dobriyal is good. Ayesha Mohan is mediocre. Jesse Randhawa is good but she portrays a half baked character.Piyush Mishra is annoying and gets on the nerves. Aditya Srivastava is good. Mahi Gill is brilliant in the limited screen time that she gets.

Anurag Kashyap needs to stop making crap movies. A movie needs to have a purpose and it should either entertain or tell a brilliant story. Instead all his movies seem like they are made only to get back at someone/something. The audience should not be subjected to his frustrations. The movie is horrible inspite of great performances by some of its cast.